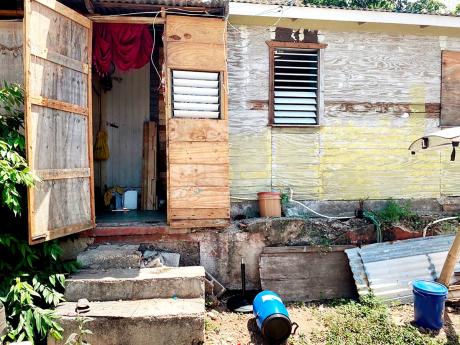 The house in Elleston Road in Kingston where Beverly Summerville, 60, and her son, Junior ‘Little Pig’ Byfield, were shot and killed on Saturday.

Paul Byfield was next door when he heard explosions coming from the direction of his mother's house on Elleston Road in Kingston and rushed to check on her. When he got there he saw her clutching her stomach. He quickly realised that she was hurt.

"Paul, you know say me get shot," were her last words to him before she collapsed on the floor. His younger brother, Junior 'Little Pig' Byfield, was also shot and left for dead in an adjoining room.

Gunmen had entered their house and shot Beverly Summerville, 60, and her son.

"Me nuh know wah fi do right now," a tearful Paul told THE STAR yesterday. "The two a them gone one time, me mother and me brother. To how me feel it me can't even talk."

Reports from the Elletson Road police are that about 12:55 p.m. on Saturday, May 29, Byfield and Summerville were in their community when armed men approached them and opened gunfire in their direction, hitting them both. They were taken to the hospital where they were pronounced dead.

Paul said that his mother was preparing a meal when she was shot.

"When me run in and me see the fire under the pot, and me say Mommy, you a cook? And she only look up and say dem shoot har. Me run out a the house and try get a taxi by the time me reach him, it drive off. So a one a me brethren help me try save me mother. Him even almost crash a try save mommy," Paul cried.

"A just some food she a cook and them take her like that. Jah Jah!"

Summerville's grandson, Damoie, is deeply wounded by the tragic incident that robbed him of his uncle and grandma.

"Me sleep here every night with me grandmother and me uncle. My grandmother, even though we not on good terms sometimes, always looked out for me, she cook food gimme and ting. But me and me uncle now a like best friends," he said.

"A yesterday him buy me a fan because a bare mosquito in a me house. Him always make sure me good. Right now this mash up daddy, so me affi gwan be there for him. A did just him, my grandmother and uncle all the time," Damoie added.

Summerville's younger brother, who declined to give his name, said he and his sister shared a close bond.

"My sister was my everything. Me a tell you bout a sister that just hug me up and kiss me, and say you good me big bredda? Me mother have six girls and two boys, and out a all the girls, we were the closest," he told THE STAR.

"About a month ago me see her and every time me make plans fi come see her she say she alright and me nuh affi worry myself. Right now me nuh know how we ago break the news to mommy that her first girl dead," he said.