Fans can't get enough of Rihanna at Crop Over 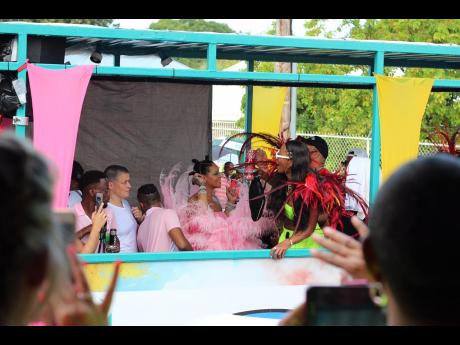 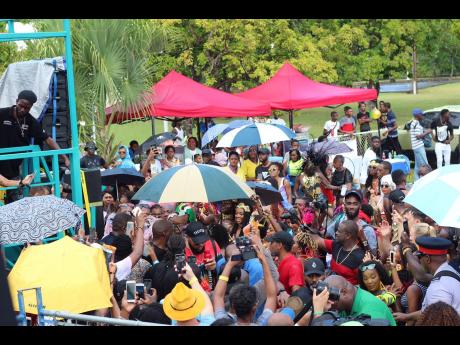 Fans in the streets of Bridgetown, eager to get a glimpse of Barbados-born international pop star Rihanna.
1
2

Barbados-born international pop star Rihanna has lit up Grand Kadooment Day in Barbados. Jumping with the Aura band, the ‘Shine Bright Like a Diamond’ artiste was resplendent in her pink flamingo-like carnival costume. She could hardly make it through the crowd as she attempted to get from her truck to the designated tent of the Barbados Tourism Marketing in Black Rock, an area in the nation's capital.

Rihanna, whose given name is Robyn Rihanna Fenty, was spotted sharing laughs with her brother Rorrey Fenty and best friend/business partner Melissa Forde as the truck she was on paused for a moment to allow bystanders to capture images of her on their mobile phones and other recording devices. Her costume, accentuated by lavish pink feathers that covered her back and arms, paired perfectly with the glittery pink stilettos that she wore. The wavy hair extensions she wore to her brother’s event on Sunday were replaced with Bantu Knots, or Chiney Bumps, as they are called in the Caribbean.

Rihanna, mindful that her fans and admirers were out to see her, appeared at one stage to have requested something to stand on inside the truck so persons could getting a better view. However, when finding a stand of some type failed, Rihanna attempted to descend the truck, but was bombarded by fans who requested autographs and selfies with her. One person even gifted her with a ripe papaya.

Several Barbados police constables, as well as her personal bodyguard, accompanied the pop star through the crowded street. Although they created a ‘great wall’ around her, that was not enough, and she quickly returned to the truck.

“That was better fan engagement than she had done in previous years, but it is best for her safety that she stay on the truck because people are too excited to see our Bajan celeb,” one bystander told THE STAR.