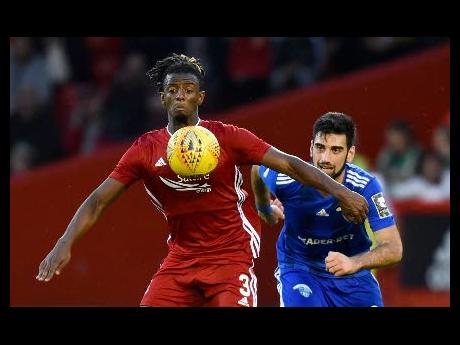 Reggae Boy Greg Leigh says his relationship with Leif Davis is "going from strength to strength" at promotion-chasing English League One outfit Ipswich Town - even though they are rivals for the left-back spot.

UK-born Leigh has started only one league game since moving from rivals Morecambe on a two-year deal in the summer but has encountered injury problems.

Davis has made 20 appearances in all competitions and twice been named the club's player of the month.

"It's been really nice to see him progress through the season," said the 28-year-old Leigh, who made his debut for Jamaica in 2020.

"Now he's racking up more and more assists, but he's a teammate - and a mate as well - and our relationship is going from strength to strength like everyone in the squad is.

Leigh played 62 minutes of Ipswich's Football League Trophy defeat by Portsmouth on November 22, the first time he had been on the pitch for more than two months.

He was not in the match-day squad for the 2-0 League One win at Exeter City which followed, or last weekend's 4-0 FA Cup victory over non-league Buxton.

"We've got a goal for the whole season, as opposed to just two players and this game and that game," said Leigh.

"We've seen players that have been in the stands for one game and then starting the next.

"Me, I just focus on helping the team when I am on the pitch, regardless of whether I'm starting or coming on, and it's a pleasure to see whoever is playing do well."

Second-place Ipswich renew their promotion challenge with a home game against Fleetwood Town on Friday night.