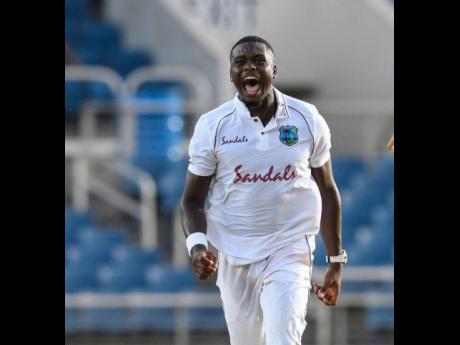 West Indies' two-Test campaign Down Under started in chastening fashion as Marnus Labuschagne unveiled an eighth Test hundred to spearhead Australia's domination of the opening day of the first Test yesterday.

West Indies were harbouring thoughts of a successful day when fast bowler Jayden Seales removed David Warner's leg stump in the morning's fourth over after they were asked to bowl on a green top at Perth Stadium, but the prolific Labuschagne arrived to stroke a supremely impressive unbeaten 154 to carry Australia to 293 for two at the close.

He was supported by left-handed Usman Khawaja with 65, while former skipper Steve Smith was unbeaten on 59 not out at stumps.

There was a testing period for Australia in the final hour before lunch when fast bowlers Alzarri Joseph and Jason Holder, along with medium Kyle Mayers also produced probing spells, but Australia weathered the challenge to take charge in the day's remaining sessions.

Labuschagne, a 28-year-old right-hander in his 29th Test, faced 270 deliveries and struck 16 fours and a six, without offering so much as a straightforward chance.

He was at the centre of two large century stands, which underpinned the innings. First, he put on 142 for the second wicket with the left-handed Khawaja, whose half-century came from 149 deliveries and included five fours and a six.

Labuschagne then added a further 142 in an unbroken third-wicket stand with Smith who counted seven fours and faced 107 balls in his 37th Test fifty.

Bidding for their first Test win in nearly two decades in Australia, West Indies made a disciplined start and were then rewarded when the 21-year-old Seales got veteran left-hander Warner, who made five, to drag on a wide ball after he had pulled the right-arm to the square boundary.

Any hopes West Indies had of making further inroads were dashed as Labuschagne and Khawaja carried Australia to lunch on 72 for one.

There were no breakthroughs afterwards either, the pair keeping West Indies without success until four overs before the tea break when Khawaja succumbed to the persistent Mayers, nicking a beauty behind for wicketkeeper Joshua Da Silva to complete the catch.

On 162 for two at tea with Labuschagne on 81, Australia dominated the final session as West Indies lost the discipline that had earlier characterised their efforts.

Runs flowed freely, the Aussies gathering 131 runs from 33 overs - more than in any of the two previous sessions - moving past the 200-run mark as West Indies wilted.

Labuschagne was first to his landmark, dispatching a long hop from Seales to the square boundary about three-quarters of an hour after the resumption, while Smith raised his 50 with a single to deep cover off ineffective off-spinner Roston Chase in the fourth over following the final drinks break.

West Indies came closest to removing Labuschagne on 137 when he cut Seales uppishly to deep point where debutant Tagenarine Chanderpaul just failed to reach the catch, but the Queenslander remained steady to bring up his 150 in the third over before the close.