Atomica will not be beaten in Mouttet Mile 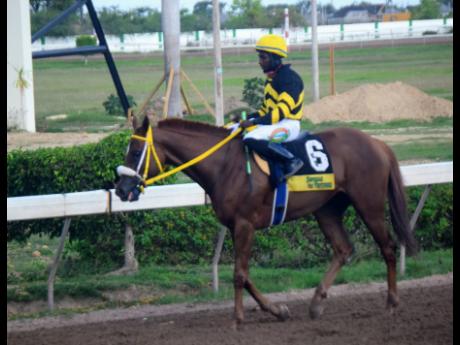 Whereas ATOMICA got caught behind speedy lightweights SHE'S MY DESTINY and SHE'S A WONDER along the rail, from as early as the half-mile marker, when MAHOGANY made his move on the outside in the Gold Cup, the weight allotments and distance of Saturday's Mouttet Mile present a gift to the Derby winner.

Imagine SHE'S MY DESTINY running with only 98lb and SHE'S A WONDER at 111, setting cracking splits for their respective stablemates, I AM FRED and MAHOGANY, who got a dream run on the outside, while ATOMICA starts hauling up in traffic three furlongs out with 110lb in the Gold Cup.

That was the Gold Cup scenario in which ATOMICA ran what, on paper, appears her worst-ever race but, in reality, was possibly her best-ever performance before the Jamaica Cup massacre three weeks later. To have finished eight and three-quarter lengths behind MAHOGANY in the Gold Cup, after straightening almost last, counts as a victory for ATOMICA, considering RUNAWAY ALGO was only two lengths behind the winner.

Renewing rivalry with MAHOGANY in the Mouttet Mile, ATOMICA comes in at 117lb, nine pounds lighter than the five-year-old gelding, her only danger in the 16-horse field. MAHOGANY's help in the Gold Cup, SHE'S A WONDER, has sadly passed, leaving him to fend for himself from post-position three with SHE'S MY DESTINY breaking like a bullet from stall one, carrying 112lb.

SHE'S MY DESTINY clocked 1:37.3 with Walker at a mile three weeks ago and will relish the weight and draw, getting 11lb from MAHOGANY, who will have to try getting away quickly from the inner, especially with RUNAWAY ALGO, ATOMICA and MAKEUPARTIST on his outside in mid-track.

MAHOGANY is at risk of getting a taste of ATOMICA's Gold Cup medicine when the pace quickens at the half-mile, which could leave him flat-footed along the rail with 123lb.

ATOMICA could not have asked for a better draw. From post-position seven, Dane Dawkins has the lay of the land aboard a track record-setting runner with 117lb. At a mile, ATOMICA will be able to run her race from mind-track and turn on the afterburners leaving the three with no traffic to negotiate.

MAHOGANY might be a tough cookie and running out of his backyard, the mile chute, where he has flirted with track records, however, ATOMICA has him cornered this time around. He won't beat her coming from behind.