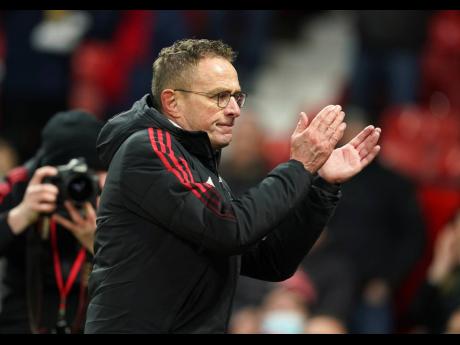 Ralf Rangnick began his tenure as Manchester United manager with a 1-0 win over Crystal Palace in the Premier League thanks to a rare goal from Fred at Old Trafford on Sunday.

The Brazil midfielder took aim with his weaker right foot and curled a shot from the edge of the area into the far corner in the 77th minute.

Rangnick was hired on Monday as manager until the end of the season but had to wait nearly a week before taking charge of his first game while he secured his work permit.

He has already made an imprint on United's approach, deploying a 4-2-2-2 formation and getting his players to press high and play with more urgency compared to how the team set up under Rangnick's predecessor, Ole Gunnar Solskjaer.

However, a performance that started strongly tailed off in the second half, only for Fred to provide the telling intervention for just his second goal of the season.

Before that, Alex Telles had clipped the crossbar with a curling free kick and opposite full back Diogo Dalot had curled over at the end of a marauding run.

Cristiano Ronaldo started and played the full game, but didn't have a clear-cut chance.

Palace should have gone ahead just before Fred's goal when the ball fell to Jordan Ayew following a corner. Just a few metres from goal and at an angle, Ayew drove a shot across the face of the goal.