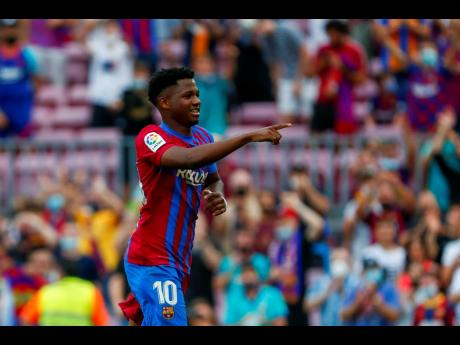 Barcelona’s Ansu Fati celebrates after scoring his side’s third goal during a Spanish La Liga match between Barcelona and Levante at the Camp Nou stadium in Barcelona, Spain yesterday.

Wearing the No. 10 jersey that used to belong to Lionel Messi, Ansu Fati made a triumphant return from a long injury lay-off yesterday, scoring a goal and giving Barcelona fans hope for the future.

Fati, who hadn't played in more than 10 months because of a knee injury, scored in stoppage time to seal a 3-0 Spanish league win over Levante that helped ease some of the pressure on Barcelona, following a three-match winless streak.

The 18-year-old Fati was loudly cheered by the crowd at the Camp Nou Stadium when he entered the match in the 81st minute, then profusely celebrated after scoring with a low shot from outside the area.

He has been one of Barcelona's most promising stars and is seen by many as a player who can help the Catalan club overcome Messi's painful departure to Paris Saint-Germain.

It was Fati's 14th goal in 44 matches with Barcelona, and his first since the "clasico" against Real Madrid at Camp Nou last October. He ran near the stands after the goal to thank his relatives.

Fati's initial recovery time from his left-knee injury was about four months, but there were several setbacks in the recovery process and he needed four surgeries to fully heal.

Fati debuted with the first team in 2019 as a 16-year-old. He eventually became the youngest scorer for Barcelona and for Spain's national team.