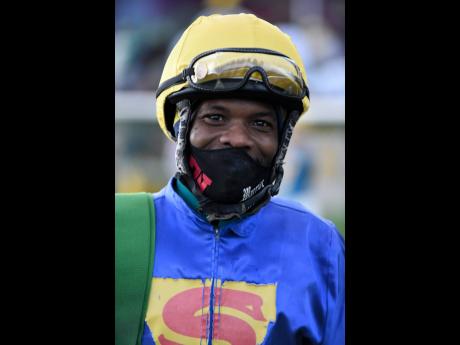 Nelson logged a double on the eight-race card to move his aggregate of wins for the season to five in the jockeys' standings at the western Canadian racing oval, where Barbadian Rico Walcott leads the way with 52 wins.

Nelson defied challenges early on for a front-running, win aboard the 8-1 choice Wheelsupinthirty in the CAN$8,000 fifth race over one mile on the dirt.

Wheelsupinthirty maintained the lead after coming under pressure from Chillin with Chip, under Edgar Zenteno, through the first half of the race before Nelson drew the six-year-old, dark bay mare clear on the far turn and she held firm to finish in one minute, 39.45 seconds.

Nelson had to work for his second win, but he brought the curtain down on the day's programme with a 4 3/4-length win astride the 5-1 chance Backstreet Bobby in the CAN $14,180 eighth race over six furlongs on the dirt.

Backstreet Bobby was unhurried through the first half of the race, running in the middle of the pack, before Nelson chased the leaders through the final turn on the seven-year-old, dark bay gelding to grab the lead in the homestretch and win going away in 1 min, 09.68 secs.