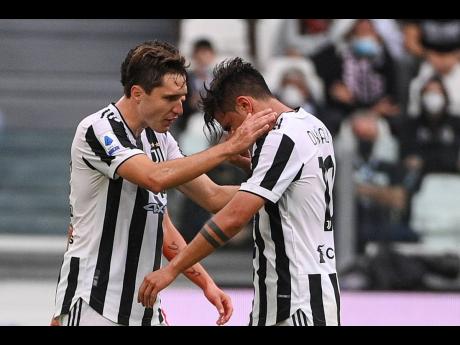 Juventus’ Paulo Dybala (right) is consoled by teammate Federico Chiesa as he leaves the pitch after suffering an injury during the Italian Serie A match between Juventus and Sampdoria, in Turin, Italy yesterday.

Paulo Dybala left the field in tears shortly after scoring to set Juventus on the way to a 3-2 victory over Sampdoria in Serie A yesterday.

Dybala has endured a number of muscular injuries over the years, and it appeared as if he had suffered another one after pulling up suddenly. The Juventus forward was able to walk off and was consoled by his teammates as he did so, but will miss Wednesday's Champions League match against Chelsea.

It was an unconvincing win for Juve and only their second of the season. It lifted the Bianconeri up to ninth, eight points behind Serie A leader AC Milan.

In Turin, Juventus were keen to build on their first win midweek and it started brightly. Dybala gave them the lead with a delightful strike into the bottom right corner from outside the area in the 10th minute and the Bianconeri could have extended their lead before the 27-year-old was forced off after pulling up injured, clutching the back of his leg.

The tempo fell after that but Bonucci drilled a powerful penalty into the bottom left corner two minutes from the break to double Juve's lead after a handball from Nicola Murru. It was a first penalty in Serie A for Bonucci, who has taken spot kicks for Italy.

But Sampdoria pulled one back a minute later. Mattia Perin did well to parry Fabio Quagliarella's effort, but the resulting corner was taken short and Candreva whipped in a cross for Yoshida to head into the far side of the net.

Juventus restored their two-goal advantage 12 minutes into the second half. Locatelli started and finished the move after great work by Federico Chiesa and Dejan Kulusevski.

Candreva scored for Sampdoria seven minutes from time to set up a nervy finale for Juve.