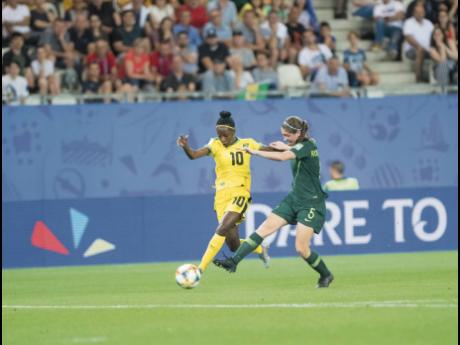 Jamaica’s Jody Brown (left) dribbles away from Australia’s Karly Roestbakken in a first round match at the FIFA Women’s World Cup in 2019.

President of the Jamaica Football Federation (JFF), Michael Ricketts, says that the increase in regional qualifying spots for the Women's World Cup would create an easier path for the Reggae Girlz to make it to the tournament.

FIFA, the sport's world governing body, announced last week the qualification allocations for all confederations for 2023 version of the tournament that will be held in Australia and New Zealand. The tournament will be the first that will feature the expanded 32-team format which has increased the qualifying spots for all regions.

Concacaf will now have four automatic berths to the tournament, an increase from the previous three spots and a continental play-off position. Africa will also have four spots while Europe will now have 11 qualification spots an increase from nine in the previous cycle. Asia will have six spots while South America will have three places. Australia and New Zealand have taken one spot from the Asia and Oceania regions, respectively, having qualified as co-hosts of the tournament.

Ricketts says while he is pleased that future paths towards qualification would be more attainable, they are not taking anything for granted.

"Certainly, it would make life a lot easier for us. When we qualified it was a huge challenge. Now it will be just a little bit easier but we are not going to rest on our laurels," Ricketts told STAR Sports. "We are still going to work hard and we are going to ensure that we give as much support to our women's programme as is necessary."

Jamaica became the first English speaking Caribbean country to qualify for the finals, defeating Panama on penalties for the last automatic qualifying spot at the 2018 Concacaf Women's Championship held in the United States. The new women's calendar for 2021 has the qualifiers slated to begin in November and Ricketts says that plans are being made to fastrack preparations so that the team could be properly prepared.

"With this announcement, we have to expedite all processes leading up to November. So certainly, next on the agenda to set alight for want of a better term our women's programme," Ricketts said.

Ricketts also warned against complacency as he believes that the increase in chances to qualify, which include the continental playoffs, also gives competition teams motivation to claim those spots for their own.