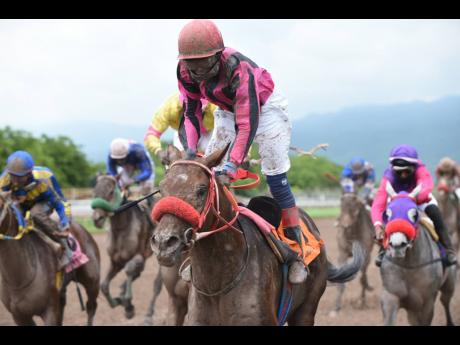 Having notched her first victory of the season, top female apprentice jockey Samantha Fletcher says she is very delighted to have got the 'monkey' off her back.

Fletcher recorded the 11th win of her career when she piloted home the Junior Panton-trained PARTY PRINCESS to victory in the eighth race on Sunday, October 11 at Caymanas Park.

The 27-year-old Fletcher told STAR Sports that last Sunday's victory has given her a lot more confidence for the reminder of the year.

"I must thank God and I must thank the trainer (Junior Panton) for the support because he was the one who gave me my first winner and he is the first person to give me a winning ride this year," said Fletcher.

"I am very happy that I came off the mark now because I have been working very hard for this all season, and to finally get it now kind of eases some pressure off my shoulders," she said.

"I have been working just as hard as the men because if you don't work hard then you can't get any live rides," said Fletcher. "Sometimes you work and you don't get any, and so you just have to stay calm and stay focused at all times," she said.

Fletcher underscored that despite the limited success in the saddle this season, she has no plans of giving up on her trade.

"I have been getting some rides and so I have to give thanks to the trainers for their love and respect. I know that a lot more winners will come this year, but I just have to be patient," she said.