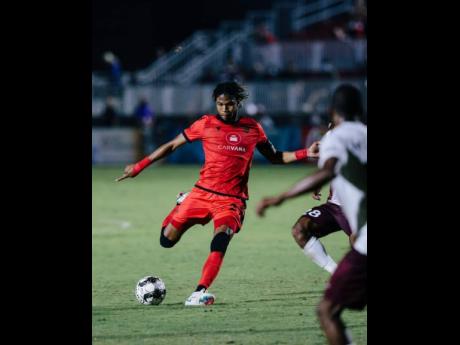 National midfielder Kevon Lambert notched a 46th-minute goal as his Phoenix Rising team eked out a 5-4 penalty shoot- out win over Reno 1868 in their Western Conference semi-finals over the weekend.

The teams had earlier played to a 2-2 draw after Reno had taken a two-goal lead through a Corey Hertzog goal in the sixth minute and Kevin Partida in the 40th minute.

Lambert then struck just before the half, after which Solomon Asante then sent the game into extra time with a 71st-minute strike.

After there were no goals in extra time, Phoenix Rising goalkeeper Zac Lubin then denied Reno's Aidan Apodaca in the fifth round of the shoot-out for the lone save for either side, allowing Rufat Dadashov to convert with Phoenix's fifth-round shot and earn a place in the Western Conference final.

Phoenix will go on to face Saeed Robinson's El Paso LocomotivE, who also had to book their spot from the penalty spot following a 5-3 win over Romeo Parkes' New Mexico United.

The teams had battled to a one-all scoreline in full and extra time, with Dylan Mares giving LocomotivE a 30th-minute lead. Former St Georges Soccer Club striker Parkes then levelled the scoring in added time to send the game into extra time.

El Paso Locomotive FC goalkeeper Logan Ketterer came up with the big save in the shoo-tout to deny Parkes to help send his side back to the Western Conference final.

Over in the Eastern Conference, Lucky Mkosana scored in the 79th minute to lead the Tampa Bay Rowdies to a 1-0 win over Nique Daley and the Charleston Battery.

The Rowdies will face Devon Williams and Louisville City FC in the Eastern Conference finals after City got by St Louis FC 2-0.