Mahogany to get better of Wow Wow 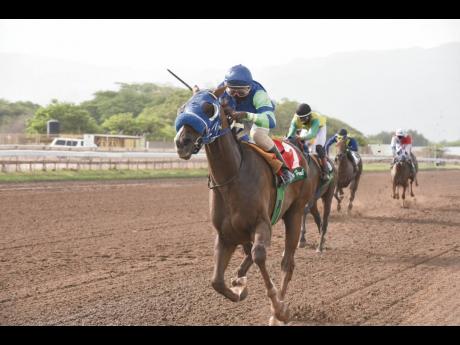 THEIR Guineas showdown turned out to be a 'what-if' when Dane Dawkins got stage fright aboard MAHOGANY, tore away on the lead and WOW WOW chased him down, pulling a length and a half clear a furlong out, to win by three in a fast 1:37.3.

Though WOW WOW won in commanding fashion, after having to chase splits of 23.1, 33.4, 45.0 and 57.1, the 'what-ifs' became even louder when MAHOGANY returned three weeks later to rip apart older horses in an overnight allowance at eight and a half furlongs, getting within four-fifths of the track record in a 10-length win.

With Omar Walker displaying how Dawkins should have handled the first half-mile of the Guineas, 45.4, as opposed to 45.0, the six-time champion jock eased into 1:10.0 for six furlongs and 1:36.2 for the mile, after which MAHOGANY stopped the clock in 1:43.0.

However, WOW WOW's follow-up race, though not as glitzy, was certainly gutsy and technically two classes higher than MAHOGANY's romp against overnight allowance runners, the best of the lot being SENTIENT.

WOW WOW took on the country's top-rated horse, TOONA CILIATA, being allowed only eight pounds, and ran the race of his life, his best performance yet, at nine furlongs and 25 yards, losing by five lengths in a graded-stakes time of 1:53.3.

TOONA CILIATA had posted the exact time, 1:53.3, last November after finishing third in the Diamond Mile and second in the Superstakes, races won by SHE'S A MANEATER.

Against TOONA CILIATA, WOW WOW proved that he belongs in graded stakes and has no fear of two turns whereas MAHOGANY has never tackled route race in his eight starts. WOW WOW's come-from-behind win in the Guineas confirmed his stamina and class, which will be crucial at 10 furlongs.

MAHOGANY carrying 117lb and annihilating overnight allowance horses in a sprint out of the chute looks really good on paper. However, he would have to prove his stamina at 10 furlongs, sitting level at 126lb with WOW WOW, who was slowly into stride in the Guineas and still managed to catch him a furlong and a half out going a mile.

Blasting 1:25.2 at exercise last Sunday was really an impressive piece of work by MAHOGANY. However, that same morning, two-year-old SUPER DUPER and the filly SWEET TOPPINS galloped together, posting 1:06.2 and 1:06.3, respectively, for five and a half furlongs. Notoriously slow TRICKY ONE, galloped 1:00.4 for five furlongs, suggesting the track was on the fast side.

WOW WOW, as usual, breezed seven furlongs in a deceptive 1:29.0, conserving his energy for the real deal, 10 furlongs of the St Leger, as he aims at the Triple Crown.