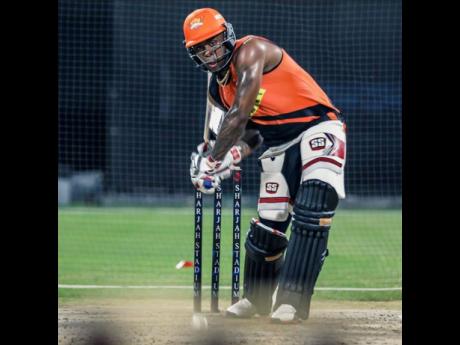 Jamaican all-rounder Fabian Allen is itching to get his opportunity to showcase his talent in the Indian Premier League (IPL) with the Sunrisers Hyderabad.

The West Indies player only took part as a substitute fielder for the Sunrisers team who went down by 10 runs to the Royal Challengers Bangalore in their opening fixture of the 2020 edition yesterday.

Allen, who missed the Caribbean Premier League due to a flight mix-up , has not had any full cricket action for over six months. However, the 25-year-old says he has been adapting well to his new franchise team and is hoping to play a part in the team's title aspirations.

"I haven't set any personal goals, but I just want to work hard and try to contribute to the team in any way I can. Hopefully, that will bring some success for me. Whatever the coaching staff needs from me, I will give my best. As far as my role, nothing has changed. I will try to have a positive effect on all the three phases for my team."

"Preparations have been good and the coaching staff has been brilliant putting us through some great training and match situations. The bubble hasn't been difficult and my teammates are a good bunch to be around, so it helps," added Allen.

The Sunrisers team is being led by Australian David Warner, who, alongside Englishman Jonny Bairstow and Indian Manish Pandey, will be leading the batting charge.

Allen, who also bowls steady left-arm spin, believes the team's bowling unit is one of the strongest in the tournament with the likes of Bhuvneshwar Kumar, Sandeep Sharma and Rashid Khan in the ranks.

"We have a very complete team with strong players at all levels, but I think our bowling unit is really special and they will keep us in games," he said.

Allen says he is hoping that he gets the nod when his team face off with the Kings XI team, which features West Indies' Nicholas Pooran, Sheldon Cottrell and Chris Gayle.