Hayward returns to Celtics for Game 3 of East finals 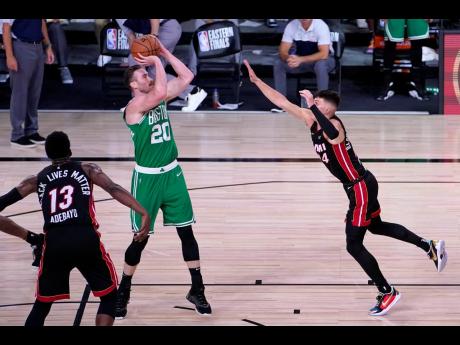 Gordon Hayward has been part of Boston teams that have made the Eastern Conference finals twice in the past three seasons.

He's finally gotten to play in that play-off round.

Hayward returned to the Celtics' rotation in Game 3 of their East title series against the Miami Heat on Saturday night, after missing a month while recovering from a right- ankle sprain. It was his first time in an East finals game; he was inactive for all seven Boston games in the 2018 series and the first two this year, both times because of injuries.

"I think it was really fun to be back out there with the team, with the guys," Hayward said. "I just tried to impact our team in winning ways, whatever I could do."

Hayward checked in with 5:06 left in the opening quarter. The Celtics said his minutes would be monitored in Game 3.

"He can score the ball. He can switch all the different positions. He gives us a lot of defensive flexibility there. He just gives us a lot," Celtics coach Brad Stevens said. "And I think that he's always been a guy that provides a great sense of stability."

Hayward played 34 minutes in Game 1 of Boston's first-round series against Philadelphia when he hurt the right ankle. The Celtics said Hayward would be out at least four weeks with what they said was a grade-three sprain, the most severe level; his absence was about 4 1/2 weeks, so he was right on the envisioned schedule.

"We don't expect him to be a world-beater, but I think his presence helps us," Stevens said.

Hayward had a strong season for the Celtics, averaging 17.5 points, 6.7 rebounds and 4.1 assists on exactly 50 per cent shooting. Hayward was only the second Boston player to have those numbers, or better, over a full season; Larry Bird is the other, and he did it five times for the Celtics.

The Celtics' win on Saturday cut Miami's lead in the series to 2-1. Game 4 isn't until Wednesday, so Hayward gets plenty of recovery time.