Beckford still has hope for national call - ... despite pause in local football 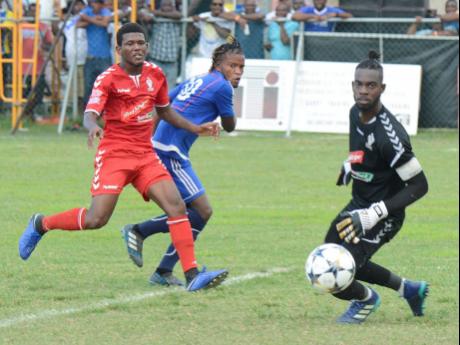 File Amal Knight (right), goalkeeper from UWI FC, looks on as the ball rolls past the goalpost from a shot by Kemar Beckford (centre) from Mount Pleasant, during the second-leg semi-finals of the Red Stripe Premier League football.

Mount Pleasant forward Kemar Beckford, who scored on his national debut against Bermuda in February, says although no football has been played locally since March, he is fit and ready if national team coach Theodore Whitmore should call him up for national duties at any time.

Beckford believes his and other local players' chances of being a part of Whitmore's squad for the 2022 World Cup qualifiers have been severely hampered by the absence of the local premier league. But he is hoping that he left a good impression on the coaching staff from the last encounter, and he hopes this will be enough to for him to get another chance to represent the country.

"Not having the league really affects me because my aim last season was to win the premier league and get a call-up for the national team, and my biggest dreams were coming true as I was set to win the league and set to make the national team. So, not playing the sport now is hard for me because I really want to be in the World Cup qualifiers and all the games. I really want to be in the squad," he said.

Jamaica defeated Bermuda 2-0 in their last outing, with Beckford and Mount Pleasant teammate Jourdain Fletcher getting the goals in the match. Beckford also had a good all-round game, and he is hoping when the time comes, the coaches will remember his contributions and give him the opportunity to prove himself.

"I really gave my all in the last game Jamaica played. I hope they saw that I have the work rate and everything. No player in Jamaica is playing any league now, it's just the overseas players playing league, so we are at a disadvantage. So we need the league to start so the (national) coaches can see the local players, and I want the league to start so I can show them I am continuing from where I left off and prove to them that I am supposed to make that squad," he continued.

"Throughout the whole pandemic our club gave us a schedule training programme to work on, and I worked with the national team as well, so I just stay home and do my private training. I do a lot of running and hills and inside gym work. So I am always in training. I know my fitness level is at 100 per cent so any time my club or national team is ready for me I am 100 per cent ready, because I don't stay home and relax, I am always training. So I will be ready any time I get the call."

Beckford was the league's leading scorer with 14 goals, when the competition was called off in March with only four preliminary-round games to go. Mount Pleasant were second in the standings, one behind league leaders Waterhouse on 54.

The Red Stripe Premier League is tentatively set to start in October/November.