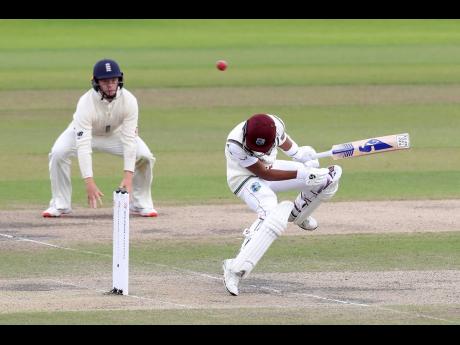 The West Indies cricketers have just arrived home, having relinquished the Wisden trophy to England 2-1 in their three-match Test series.

STAR Sports decided to rate the players' performances over the three matches which ended on Tuesday. The West Indies won the first match in Southampton while England had back-to-back wins at Old Trafford to clinch the series.

West Indies' leading run-scorer, who took the fight to the English bowlers, showing true grit and determination on his comeback tour.

Useful contributions early in the series with the bat and decent returns with the ball, with eight of his 10 wickets being top-order batters.

Heart of a lion in the bowling attack in the early exchanges before niggles set him back as the series went on.

Lacking a few leadership qualities at times as captain; however, his six wickets with the ball in the first Test showed he is a capable all-rounder, once his batting starts to click again.

Bowled well right throughout the series without much luck; however, more than deserves his 200th Test wicket to join an elite group of West Indies fast bowling greats.

Easily has the best batting technique in the team; however, lack of time at the crease proved crucial, which meant just a couple of half-centuries on tour.

Started the series promisingly with some runs at the top of the order but the English bowlers worked him out and he became a prime lbw candidate, falling victim three times.

Another player whose confidence shattered as the lengthy tour went on. Started off well but faded miserably towards the end with both bat and gloves.

One for the future. Bowled with purpose in a couple of spells in the first Test but wasn't as penetrative in the second and got knocked around by the English batters.

Looked at sea against the moving new ball in the English conditions. Lots of work to be done.

Looked a shadow of himself from his last Test outing. However, took the best catch of the series at slip.

Another of the batsmen who flattered to deceive. Much was expected but a lack of confidence and poor shot selection exposed the talented right-hander.