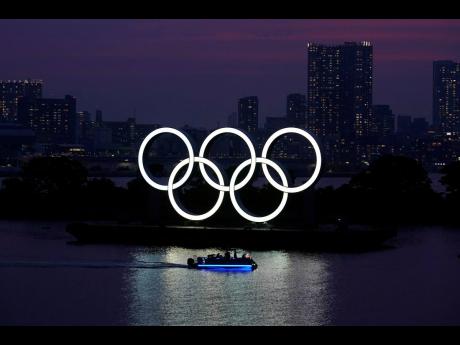 In this June 3, 2020 photo, the Olympic rings float in the water at sunset in the Odaiba section in Tokyo.

The spokesman for the Tokyo Olympics expects the postponed Games to go ahead in 2021, despite a recent poll in Japan in which 77 per cent of respondents said they did not believe the Games could be held next year.

The poll by the Japan News Network said only 17 per cent thought it could be held next year, in the face of the coronavirus pandemic.

Masa Takaya, the spokesman, was speaking yesterday on remote hook-up on a day of contentious news for the Tokyo Olympics.

Tokyo's city government reported a single-day record of 224 new coronavirus infections yesterday, surpassing a high of 204 in April. Though low by many standards, it marks a steady increase over the last week in the Japanese capital.

Japan has recorded about 1,000 deaths attributed to COVID-19.

Takaya said the way the polls are constructed "may result in very different messages". He said Tokyo's only plan was to open the Games on July 23, 2021.

Also, Takaya did not flatly deny a leaked report in almost all Japanese media that said organisers were on track to secure all venues for next year's Olympics.

"Tokyo 2020 is aware of these media reports," Takaya said. "I need to be very clear that this is not something that the Tokyo Metropolitan Government or the organising committee has made a formal announcement on."