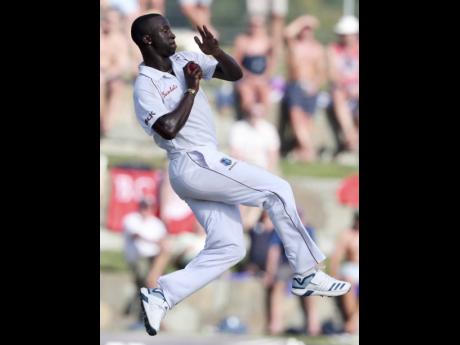 West Indies’ Kemar Roach bowls against England during day one of the second Test cricket match at the Sir Vivian Richards Stadium in North Sound, Antigua and Barbuda, Thursday, January 31, 2019.

West Indies fast bowler Kemar Roach says he will have to adapt quickly to the new England top-order batting line-up as they look to get a good start in the three-Test series which starts on Wednesday with the opening match in Southampton.

Roach, who was speaking to journalists via a Zoom press conference on Sunday, says they will have to formulate a plan quickly, as England will only field two of the top six batters that played in the series the last time the regional men toured the UK.

Only Ben Stokes and Joe Root featured in that 2017 series, and England will be without Root for the first Test due to the birth of his second child.

"We have seen where England have made some changes to their batting line-up and it's all about assessing each batsman, studying their weakness and exploit that. Of course, we would have loved to have bowled to the same batting line-up because that is what we were accustomed to the last couple of series we had, but it's all about sticking to your game plan and see how well we can come up against them," said Roach.

The 32-year-old Roach will be eager to get out on the park as he is just seven wickets away from reaching the illustrious 200-wicket club among the likes of greats Courtney Walsh, Sir Curtly Ambrose and Malcolm Marshall, to name a few.

Roach hinted that he will lead a fast bowling quartet which includes captain Holder, Alzarri Joseph and the returning Shannon Gabriel, who he believes will create havoc on the England batters.