Bundesliga working with German gov’t to bring back fans 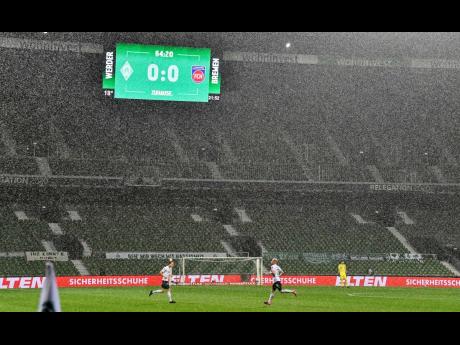 The board shows the result in heavy rain during the German Bundesliga relegation first-leg football match between Werder Bremen and 1. FC Heidenheim in Bremen, Germany, on Thursday, July 2.

The German men's football league is working with the government on a plan to get fans back into stadiums during the coronavirus pandemic, its CEO says.

Christian Seifert, CEO of the German Football League, which runs the top two divisions, told German weekly Frankfurter Allgemeine Sonntagszeitung that ideas were being discussed with the government.

"Mass events are de facto ruled out until October 31 unless they have a hygiene concept and it's possible to track the attendees afterwards," Seifert said in an interview published yesterday.

"We are working on guidelines of that sort and we have some first thoughts which we are exchanging with the Federal Ministry of Health."

Germany was the first major European football league to resume in empty stadiums amid the pandemic on May 16. Only one more game remains in the season -- a promotion-relegation play-off second leg on Monday between Werder Bremen and Heidenheim.

Seifert said any plans to play with fans present in the 2020-21 season would have to take into account the venues' layout and the spread of the coronavirus in the local area. He also praised fans for showing "a lot of discipline" in not gathering outside stadiums hosting games.

German media have reported that top-division clubs have been studying the idea of holding games with a reduced number of fans, typically with socially distanced seating.

Local health officials in Leipzig said Thursday they had approved a plan for up to 21,000 spectators - or 50 per cent of capacity - at the Red Bull Arena with masks required and gaps between supporters, the dpa news agency reported.

Local officials have wide-ranging powers in Germany during the pandemic, but it's not clear whether the league would allow some teams to resume with fans if others were still in empty stadiums.