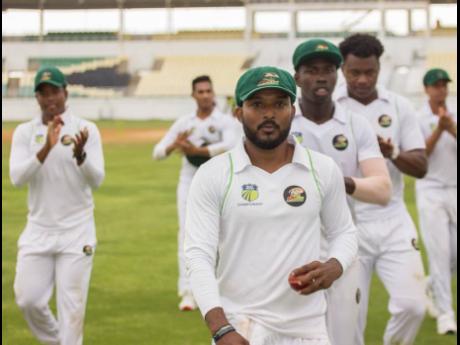 Man of the match Veerasammy Permaul is applauded off the field by his teammates after picking up eight wickets against the Jamaica Scorpions on day three of their Cricket West Indies Regional Four-Day Championship match at the Trelawny Stadium on Sunday, December 1, 2019.

The exclusion of Guyanese Veersammy Permaul from the Windies squad for the upcoming tour of England has provoked the ire of Berbice Cricket Board (BCB) President Hilbert Foster who condemned it as "sickening treatment" and demanded an explanation for the exclusion of the right-handed batsman.

Permaul was not among either the 14 selected to take on England in the three-Test series that is taking place under strict protocols due to the COVID-19 pandemic, or the 11 reserve players who are accompanying the team to ensure replacements are available in case of any injury. Fellow Guyanese Shimron Hetmyer and Keemo Paul declined places in the squad.

Hours after Cricket West Indies (CWI) released the names of the selected players yesterday, Foster said he was particularly puzzled how Permaul did not even make the reserve list when he was the leading bowler in this year's Regional Four-Day tournament with 50 wickets in eight matches, including three five-wicket haul in an innings and two 10-wicket haul in a match.

"The BCB would like to condemn in the strongest possible way the sick treatment being handed out to this outstanding son of Berbice and would like for an explanation to been given on his non-selection," he said.

"Has a decision been taken that Permaul's career is over at just 30 years old? Is there another unknown factor for his non-selection? Is he indisciplined? Is he considered just a regional bowler or is he too old?

"We deserve to know as the BCB is without doubt the hardest working cricket board in the Caribbean and we would not sit back and watch our cricketers being treated like second class when they deserve better," Foster added.

Foster said that in the last six years, the Albion Community Centre Cricket Club cricketer has taken 290 wickets at the senior Four-Day level at an average of 16.90 and has 18 five-wicket hauls and seven 10-wicket hauls in a match.

These performances, the BCB president contended, were unmatched by anyone in the Caribbean, yet Permaul last played Test cricket in 2015, one-day internationals in 2017 and Twenty20 in 2018.