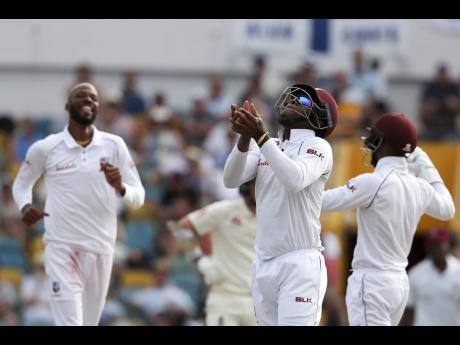 West Indies’ Shimron Hetmyer [centre]celebrates after taking the catch to dismiss England’s Ben Foakes during day four of the first Test match at the Kensington Oval in Bridgetown, Barbados, on Saturday, January 26, 2019.

Hampshire's Ageas Bowl and Old Trafford have been confirmed as venues for West Indies' proposed three-Test series against England next month.

The England and Wales Cricket Board (ECB) said yesterday the opening Test would run from July 8-12 at the Ageas Bowl in Southampton, with the second Test carded for Old Trafford in Manchester from July 16-20, and the final Test staged at the same venue from July 24-28.

While the tour is almost certain to go ahead, the itinerary is still subject to approval from the United Kingdom (UK) government.

The series will be played behind closed doors to safeguard fans amidst the ongoing COVID-19 pandemic.

"We are in daily dialogue with government and our medical team, who have been incredibly supportive during this period. These are our proposed dates and they remain subject to UK government approval.

"We would like to thank Cricket West Indies for their cooperation and dedication in making this tour a reality, and we all look forward to the prospect of cricket returning in the coming weeks."

The Ageas Bowl and Old Trafford were chosen from a list of four venues which submitted proposals to host matches during the series.

Venues were asked to demonstrate the ability to provide a biosecure environment, comprising testing sites and screening areas, space to accommodate social distancing for players, officials and media, along with an on-site or nearby hotel.

Edgbaston in Birmingham will be used as a "contingency venue" for additional training throughout July.

The 25-man West Indies squad are scheduled to arrive here next Tuesday and will use Old Trafford as their base for quarantine and training over the first three weeks, before travelling to Southampton for the opening Test.

West Indies had been originally slated to face England in May but the series was pushed back due to outbreak of the pandemic which has resulted in 276,000 infections and just over 39,000 deaths in the UK.