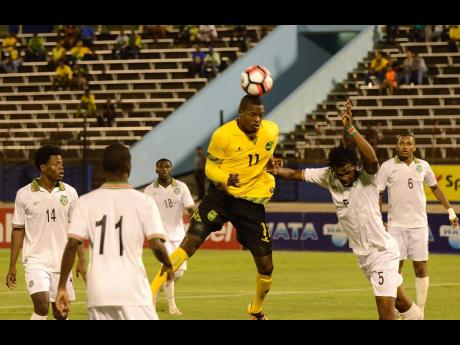 Reggae Boy Corey Burke (centre) outjumps the Suriname defenders during a Caribbean Cup qualifier at the National Stadium in 2016.

National striker Corey Burke helped to strengthen his Austrian club SKN St Polten chances of surviving in the country's top-flight as he scored his first career hat-trick in their 5-0 thrashing of WSG Swarovski Tirol in the first match of the relegation round of the Austrian Bundesliga at the Tivoli Stadium in Tirol, Austria, yesterday.

Burke was making his fourth appearance for the club since his loan move from Major League Soccer (MLS) club Philadelphia Union. The league, which was on hiatus since March because of the coronavirus pandemic, resumed with matches between the lower half of the 12 team league who are competing to ensure survival and also for places in the Europa League play-offs. Similar to other football leagues that have resumed in Europe, the match was played behind closed doors.

With his team already leading 1-0 in the sixth minute, Burke doubled the advantage in the 10th minute, intercepting the ball from a Tirol defender and coolly finishing in the corner beyond goalkeeper Ferdinand Oswald. He got his second of the game five minutes later, finishing from close range from a Kofi Schulz pass. He capped his performance with a hat-trick in the 54th minute as he slotted home past Oswald.

As a result of the bottom six clubs having their regular season totals halved before the relegation round, St Polten's win vaulted them into third place with 11 points, two pints behind second-placed SRC Altach, who are on 13 points and four point off first-placed Austria Wein, their next opponents this Saturday. Polten finished bottom of the league in the regular season with 17 points. The top two clubs in the relegation round earn places into next season's Europa League play-offs, while the bottom club will be relegated to the Austrian second division.