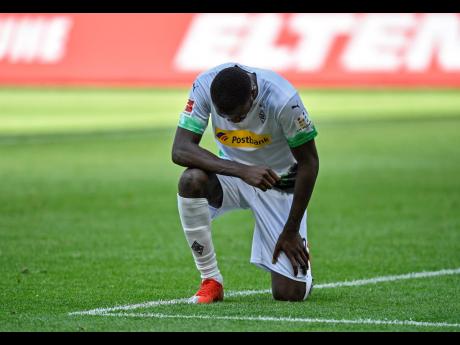 Moenchengladbach’s Marcus Thuram taking the knee after scoring his side’s second goal during the German Bundesliga soccer match against Union Berlin in Moenchengladbach, Germany, on Sunday, May 31.

Players who scored in the German and Hungarian football leagues removed their jerseys to display undershirts with the words 'Justice for George Floyd'.

Others from English football clubs Liverpool, Chelsea and Newcastle dropped to one knee during practice in a clear gesture of support.

In New Zealand, a Nigeria-born UFC fighter addressed a crowd of 4,000, imploring those listening to "speak up" and take peaceful action to register their discontent.

Dismayed by the death of Floyd and inspired by the actions of Colin Kaepernick, athletes from around the world have come together during one of the most politically charged periods in modern history.

"I can't tolerate. I won't tolerate. WE WON'T TOLERATE," Manchester United midfielder Paul Pogba, one of the world's most famous soccer players and a World Cup champion with France, wrote on his Instagram page to his 41 million followers alongside a picture of him looking to the sky with a clenched right fist.

It was powerful image to accompany the picture of 29 Liverpool players kneeling around the centre circle at Anfield Stadium at the end of a practice session on Monday. Or the entire Chelsea squad kneeling down and forming the letter 'H' -- for humans -- during training yesterday.

Their actions mimicked the one made by Kaepernick during the national anthem in 2016 in silent protest of police brutality and racism while then playing for the San Francisco 49ers.

Kaepernick's gesture kicked off a period of pregame activism in the NFL and other sports, but it didn't gain a strong hold worldwide.

Not like the killing of Floyd, a black man and former community college basketball player who died after a white police officer pressed his knee into Floyd's neck for several minutes, even after he stopped moving and stopped pleading for air.

"It hit a nerve in this very particular time, which I think made people all around the world reflect on the environment we live in, not only in the US, but in all kinds of places where there is a perpetuation of discrimination and inequality," Jonas Baer-Hoffmann, secretary general of global soccer players union FIFPro, told The Associated Press.