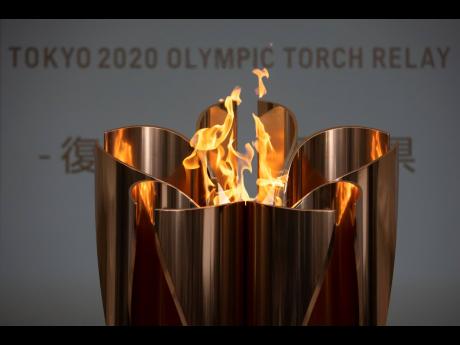 The Olympic Flame burns during a ceremony in Fukushima City, Japan, yesterday. The Tokyo Olympic torch relay will start on Thursday as planned in north-eastern Fukushima prefecture, but with no torch, no torch-bearers, no public, and little ceremony.

It's time for Olympic athletes to stand down, relax those diet rules, and dial down the training.

The 2020 Tokyo Games won't be opening in July as scheduled because of the coronavirus pandemic, Olympic officials announced yesterday, putting everyone and everything on hold for possibly another 16 months.

"No box of Wheaties for me today," American hurdler Lolo Jones wrote on Twitter alongside a video of her pouring a huge bag of candy into her tiny-by-comparison breakfast bowl.

The 37-year-old Jones hasn't competed at the Summer Olympics since 2012, and not at the Winter Games as a bobsledder since 2014. But she'll have to keep working hard for another year if she wants to make the team for the Games in 2021.

Other athletes face delaying their retirement.

"I don't want to believe it," Italian swimmer Federica Pellegrini, who was heading for her fifth and likely final Olympics, said in a video posted on Instagram. "It seems like a joke, it seems like destiny, coincidence, but the fact remains that I can't stop swimming.

"We'll prepare for it as best as we can. Now it's just about reprogramming everything, as we would have done this year. And let's hope that my body can hold on for another year," said Pellegrini, who lives in one of the hardest-hit regions of northern Italy in terms of number of virus cases.

Instead of athletes around the world being 122 days from the opening ceremony, they're now more than 400.

Five-time Olympic swimming champion Katie Ledecky, who was likely to be one of the stars of the Tokyo Games, said the delay meant people could focus on the virus outbreak.

"As we stand together to meet today's challenges, we can dream about a wonderful Olympics in a beautiful country," the American wrote on Twitter. "Now is the time to support all those working to heal the sick and keep us all healthy."

The Olympic postponement takes the pressure off athletes who need high-intensity training at a time when many facilities are closed because of the pandemic. Athletes' representatives had warned that even the remote prospect of a 2020 Olympics encouraged athletes to ignore public health recommendations and hit the gym.

"For us as athletes, the uncertainty is finally over," German triathlete Lena Meissner said. "In the last few weeks, normal training was simply impossible, and it was a very stressful situation. Now we can finally concentrate on getting through this crisis and doing justice to our social responsibility."

Only 57 per cent of qualifying places for the Olympics had been decided before the pandemic started affecting sporting events around the world, and the governing body for each sport faces a choice: do they reopen qualifying for only the remaining places, or put them all up for grabs once again?