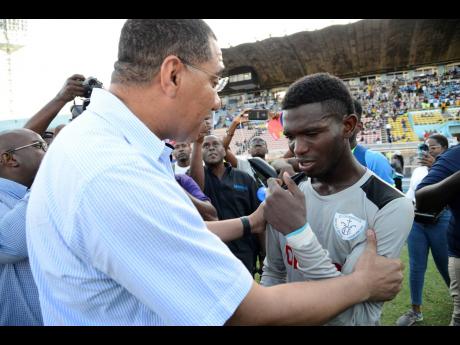 The Anthony Patrick-coached team went down to Leebert Halliman's Excelsior in the 29th minute, but three unanswered goals, including a brace from Assanie Brown, put St Catheine 3-1 up at half-time and sent Holness into delirium. Excelsior got a late second-half goal, but that did not stop St Catherine High School from claiming its first schoolboy football title.

"For many years we have got close (to winning) once or twice, but we have never won any silverware in football in the country," Holness said.

"There was a period of time when we entered competitions and the results were more like basketball scores. But now the team has obviously come into its own and for me (the victory) is payback for those days when we lose pride from losing five-nil, 10-love or 15-love. Now the team has done well and I am very happy and very proud of them and they deserve the victory," he commented after the games.

He credits principal Marlon Campbell for the support he gave the team off the field and downplayed the impact his presence had on the players at the match.

"I give credit to the principal because the principal gave significant effort and resources behind the team, in leading the team. And I give credit to the team itself. They played today with great commitment, they didn't lose composure (when they went behind) and they fought to the end," said Holness, who in recent times has adapted football fans mannerism, wearing number 10 shirts at political meetings.

"My impact wasn't much. The guys played and they came from behind, they were quite focused. Their minds were in the game and they put their hearts and souls into it and they deserve to win," Holness said.

Coach Patrick revealed that the head of state, Holness, visited the team during the break and that it served as a big motivation for the youngsters for the second half.

"He met with them (players) and spoke to them, and they were really happy to see him for the first time and we were all happy for that," Patrick said.