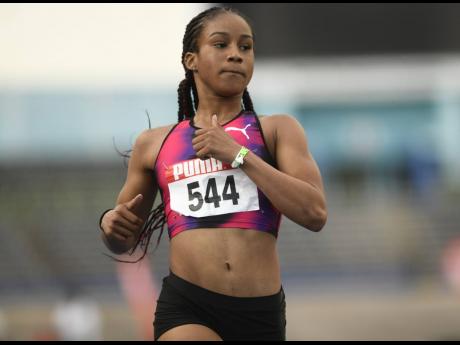 The Jamaica Athletics Administrative Association (JAAA) has provisionally named sprinter Briana Williams as part of its 55-member squad for the IAAF World Championships in Doha, Qatar.

The announcement was made at its headquarters in Kingston yesterday. Although Williams was included, her participation in Doha is still subject to the result of the anti-doping hearing between her and the Jamaica Anti-Doping Commission from September 23-25.

The junior sprinter tested positive for the banned diuretic Hydrochlorothiazide (HCTZ) in July.

JAAA president Dr Warren Blake said that Williams' provisional inclusion was a matter of treating her as innocent until proven guilty.

"We firmly believe in the principle of innocent until proven guilty," he said. "And for us not to select her, and not to put her on the team would be to punish her even before she has been found guilty.

"If it happens that the panel finds that she is culpable, and she is guilty, then she won't be on the team."

The squad is headlined by Olympic and World Champions Elaine Thompson and Shelly-Ann Fraser-Pryce who are expected to be among the medals.

World champion (2015) 100m hurdler Danielle Williams has also been included in the team after maintaining her world number one ranking throughout the summer, securing the Diamond League title in Brussels on September 6. Williams was made eligible for selection on August 15 in a reverse decision by the JAAA, who initially ruled her out of contention following the voided 100m hurdles final at the National Senior Championships in June. She broke the national record on July 20 in London in 12.32 seconds. Janeek Brown, who held the record initially, also gains a spot on the team.

The local based athletes and of the management team will leave for Doha on Sunday, and are expected to arrive the next day. Camp is expected to begin on Tuesday.