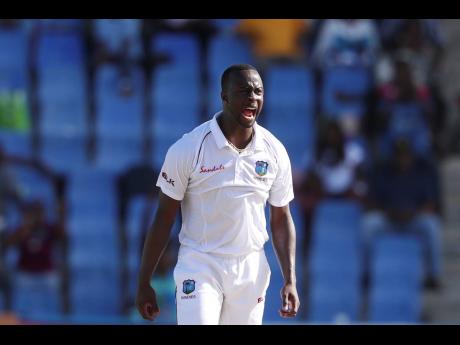 West Indies’ bowler Kemar Roach appeals during day one of the first Test. 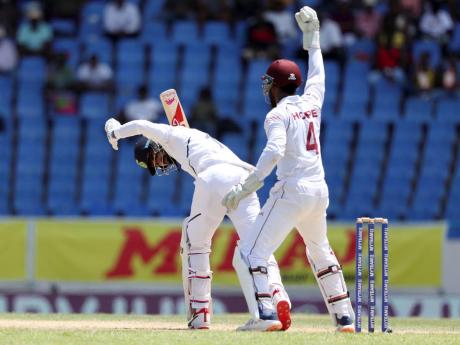 Opting to bowl first, West Indies grabbed early wickets through Roach to reduce the visitors to 25 for three before Ajinkya Rahane top-scored with 81 and opener KL Rahul chipped in with 44, to help lift their side to 203 for six at the close.

Hanuma Vihari scored 32 and wicketkeeper Rishabh Pant was unbeaten on 20 when rain at 4:38 p.m. forced a premature end to play with 20 overs still remaining.

The 31-year-old Roach was easily the best bowler on show, ending with three for 34, while new-ball partner Shannon Gabriel picked up two for 49.

Exploiting the early movement in the surface at the Vivian Richards Cricket Ground, Roach bossed the first hour as he went past the outside edge on several occasions before finally being rewarded when he removed right-handers Mayank Agarwal (5) and Cheteshwar Pujara (2) in the fifth over.

Agarwal nicked the second ball of the over behind to give wicketkeeper Shai Hope the first of his four catches. The decision was only given, however, after West Indies resorted to Decision Review System (DRS).

Four balls later, Roach also found Pujara's outside edge for Hope to take the catch moving to his right.

It was Gabriel, however, who got the prized wicket of Virat Kohli for nine, roughing up the Indian captain with a couple of short-pitched deliveries before getting him to steer a short ball to debutant Shamarh Brooks at gully, after three-quarters of an hour's play.

Rahane then came to his side's rescue in a composed innings that lasted 163 balls, just short of four hours and which included 10 fours.

More importantly, he anchored two critical half-century stands, putting on 68 for the fourth wicket with Rahul and a further 82 for the fifth with Vihari.

The stand with Rahul saw India safely to lunch at 68 for three and they flourished afterwards without dominating as West Indies persisted.

Unbeaten on 37 at the interval, Rahul perished nearly an hour after the resumption when he feathered a leg-side catch to Hope off part-time off-spinner Roston Chase, after facing 97 balls in a shade over two and a half hours at the crease and striking five fours.

Vihari, who faced 56 deliveries and struck five fours, then combined with Rahane to stabilise the innings and they were together when rain forced an early tea at 134 for four.

The right-handed Rahane reached his 18th half-century in Tests in the third over before the break when he punched ineffective pacer Miguel Cummins to cover for a couple, and pressed on following the resumption with boundaries on either side of the wicket off Chase.