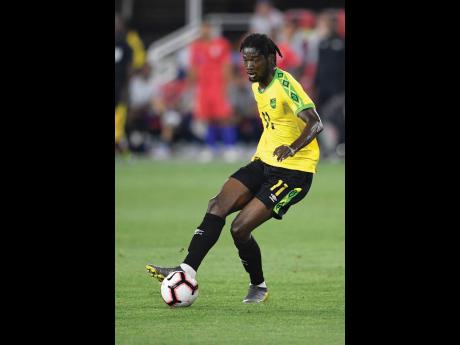 Jamaican international Shamar Nicholson has taken the next step in his career after signing a four-year deal with Royal Charleroi Sporting Club of the Belgium Jupiler League.

The 22-year-old forward was acquired from Slovenian club NK Domzale for a fee of €1.5 million. He could make his league debut as early as August 19, when Charleroi play away to SV Zulte Waregerm. Charleroi are currently seventh in the Belgian Jupiler League with five points from three games played. Nicholson is expected to be the immediate replacement for Nigerian forward Victor Osimhen, who left the club for French Ligue 1 side Lille.

He made his final appearance for NK Domzale in a 2-1 away defeat to Tabor Sezana on August.

Nicholson joined the Slovenian club in 2017, moving from Boys’ Town on a free transfer. He scored 13 goals and notched two assists in 29 appearances last season.

Nicholson is coming off a good summer with the Reggae Boyz, scoring two goals in their Concacaf Gold Cup campaign, which resulted in their third consecutive semi-final appearance.

He garnered the attention of suitors around Europe after scoring the winner in Jamaica’s friendly against the United States (US) on June 6, Jamaica’s first away win against the second- best team in the region. He scored against the US again in the Gold Cup semi-final, Jamaica ultimately falling 3-1.

His good form this summer transferred to NK Domzale during his final month with the club as he scored in both legs of the second round of the Europa League qualifiers against Malmo FF of Sweden. However his efforts were not enough as they were eliminated 5-4 on aggregate.

Former Boys’ Town head coach Andrew Price, who watched Nicholson first hand when he made his professional debut for the club as a 16-year-old, is happy that he is getting the chance to challenge himself further in Europe.

“[These are] very exciting times for Shamar. I believe that he has matured since he has gone to Europe. I believe the work over the summer has caused his movement now to the Belgian premier league,” Price said in an interview with STAR Sports yesterday.

Price is confident of greater things to come for Nicholson at his new club.

“I am very thankful and proud of him that he has been able to make a move towards a higher stage in Europe. [If] he continues in the same vein, I am sure that he’ll continue to improve and develop,” said Price.