Bennett thankful for opportunity to be certified 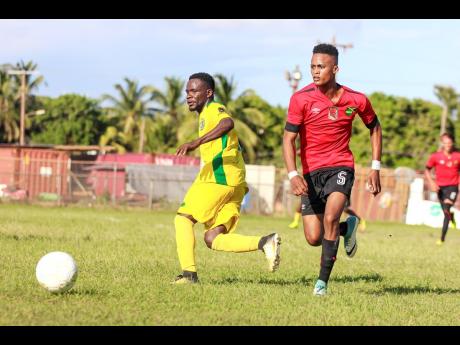 Renoir Elliott (left) of Vere FC challenges Downs FC’s Romario Witter for the ball during their JFF All-Island Confederation Play-Offs encounter at the Wembley Centre of Excellence in Hayes, Clarendon, on Sunday, June 3.

Vere United coach Michael Bennett is grinning from ear to ear after Jamaica Football Federation (JFF) president Michael Ricketts announced that the organisation would be arranging a special level-two coaching course exam for the veteran coach so thathe can be certified before the start of the Red Stripe Premier League.

Bennett, who led the Clarendon club back to top flight, does not have a level-two certificate and will not be eligible to sit on the bench when the season gets under way on September 1 without one. But Ricketts recently stated that the JFF would host a specially arranged course for the coach, who claims to have done both level-one and level-two courses back in the '90s. Bennett said that it would have been an injustice if he hadn't got the opportunity to lead the team into the season.

"I feel good about it (the specially arranged course). I thank the JFF for this initiative, especially in my case as I took the level-one and level-two courses from in the '90s with the JFF and I did the advanced-level one in the 2000s. So I have been to the Premier League twice in the '90s with those certifications, so as a coach, I have always been there, and I am thanking the JFF as I have done so much for football in this island that I think it would have been an injustice. As a person that has carried three teams to the Premier League, it would be an injustice for me not to be included at the start of the season," he said.

Bennett said that the date for his level two exam has not yet been finalised but that he expects it to be before the start of the season. "I think [the course] will be before the league starts, and I am depending on the JFF to deal with it, and I thank them. My manager, Lothian Cousins, is liaising with the JFF. He saw that it would be an injustice if I wasn't the person leading this team into the Premier League," he said.

Although Bennett has taken the course before, he still expects to learn something new. "Every exam and every course, coaches learn, and I am a senior coach, and I am learning every day. The game is evolving, and it is a lot faster, and there are a lot of new things that I can learn, as well, so I look forward to that," he said.