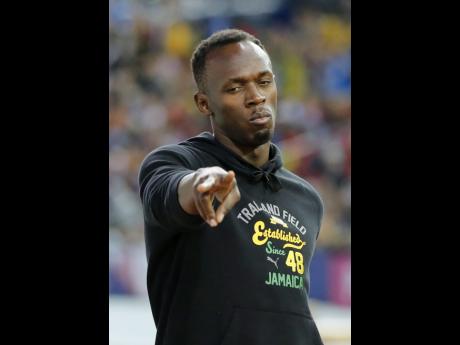 Bolt, who stepped away from the track after last year's IAAF World Championships in London as an eight-time Olympic champion and 11-time World champion, admitted that he is concerned with the mentality being displayed by some of the country's more promising youngsters and thinks the 'rich quick' trend has crippled some of the drive shown in earlier days.

"I have a lot of concerns. A lot of these athletes, I think it's much easier for them now. When we were coming up, it was a struggle, we didn't get any contracts from high school and I think a lot of the athletes aren't motivated anymore," said Bolt. "When they leave high school and they get the big contracts, they are happy with whatever."

Bolt, who himself signed to Puma as a teenager, said that he is hoping that the youngsters will look beyond the instant gratification of sponsorship and fame in the early stages of their careers and push themselves towards consistent high level performances at the senior level.

"Hopefully these athletes can motivate themselves because we are not lacking talent, we have a lot of that and I've seen that throughout the years but when they get to the senior level, they are not motivated enough and don't work hard enough to get to the level of a Usain Bolt, Yohan Blake, Shelly-Ann Fraser-Pryce and so on," Bolt said.

The 32 year-old also confirmed that he has ended his pursuit of a football career following his stint with Australia A League team, Gold Coast Mariners last year, when a contract could not be agreed.

"(My) Sports life is over, so I am now moving into different businesses. I have a lot of things in the pipeline," said Bolt.

"I don't want to say it (Mariners experience) wasn't dealt with properly, but I think we didn't go about it the way we should and you learn a lesson, you live and you learn," Bolt added. "For me it was a good experience, I really enjoyed just being in the team and it was much different from track and field."

He also reiterated that though he does not miss general life as a competing athlete, he is looking forward to playing his role in helping to promote the sport.

"I miss the senior competitions but I can never miss the training, so that always brings me back to reality. I've said to the IAAF that if they want me to play a part in helping to promote the sport in any way, I have already put that out there, but I think I have time to relax and enjoy life a little and then I can decide what I want to do," said Bolt.