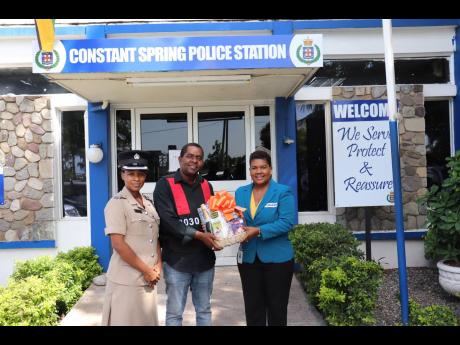 Detective Constable O’Neil Daley (centre), who is attached to the Constant Spring Police Station, receives a gift basket from Assistant Vice-President at Massy Distribution, Mervelyn Doughorty (right), in appreciation of the kindness and compassion shown to an employee of the company. Sharing the moment is Superintendent Sherika Service.

Three members of the Jamaica Constabulary Force (JCF) have been commended by Massy Distribution Jamaica for the professionalism and compassion shown towards an employee after a traumatic ordeal.

The female employee, who is a member of the company's warehouse team, was visibly distressed when she went to the Constant Spring Police Station after being held help up and robbed while walking on the road. She was consoled by the policemen, who assisted her to safety while carrying out their investigations.

The management of Massy Distribution visited the police station recently to thank the lawmen and present them with gift baskets as a show of appreciation.

Superintendent of Police in charge of the St Andrew North Division, Sherika Service, said that the conduct of the police who are attached to the Criminal Investigation Bureau was indicative of their training.

She said the officers "realised that she [the Massy employee] was shaken up because of the ordeal," and responded with care and compassion.

Service said that while the officers were carrying out their duty in serving members of the public, the response from Massy was welcome.

"We do our jobs without expectations, but we appreciate kind efforts like this from the public, and we have to work in partnership to stamp out crime in our communities," she said.

Assistant Vice-President at Massy Distribution Jamaica, Mervelyn Doughorty, said that the employee was "very distraught" and the policemen "calmed her down and took her to safety".

"They were not expecting anything, so they were pleasantly surprised, and we really appreciate what they did for our team member who was traumatised, but being around the officers, she felt protected," Doughorty told JIS News.