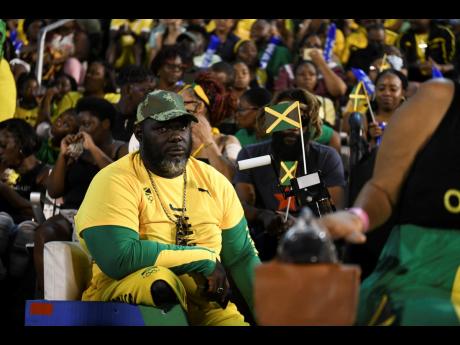 Paralympian Christopher Russell said he felt proud to be a Jamaican. 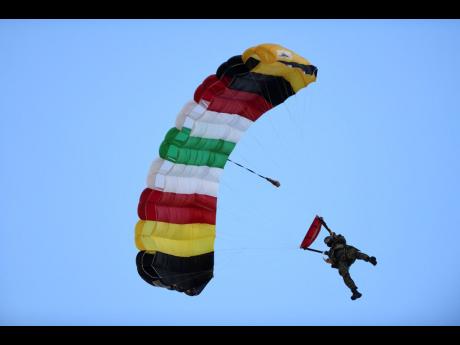 One of the paratroopers from Guyana descending on the National Stadium.
1
2

At the Diamond Jubilee edition of Jamaica's Grand Gala last Saturday, Christopher Russell was captivated by the paratrooping showcase.

Russell, a Paralympian, watched with much pent-up anticipation for more than five minutes as two members of the Harpy Eagles paratroopers of Guyana's Defence Force descended to the northern end of the National Stadium after skydiving from an altitude of 8,000 feet.

"Today feels like the day Jamaica actually gained Independence. A the best thing dem ever do. The paratroopers are in a class by themselves, that was an experience. I make sure have that one recorded with myself in it," the Cheshire Village, St Andrew, native said.

The former athlete, who specialised in discus and wheelchair basketball, last won a bronze medal in a discus competition nine years ago. His career in sports was cut short, however, after battling kidney failure. Despite the health issues and being absent from competitions, Russell still feels proud to represent his country. From his envied seat in the grandstand, he along with members of the Disabilities Foundation could be spotted from afar as their green, gold and black stood out among the crowd of 30,000.

"I still feel like an athlete. Still have the energy inside me," Russell declared.

He said that his best Grand Gala memory was witnessing fireworks for the first time. Russell's grin broadened as he shared that he once participated in the celebrations as a child and emphasised that the mood was still the same this year.

"It feels great and fabulous to be a Jamaican today. It is beautiful for my little island, we have the best food, the best music, the best athletes, rivers and beaches. I loved the performances, it was a good showcase of Jamaican heritage. My only wish for Jamaica Independence is that we have less crime, more employment and less people not going to school," he said.