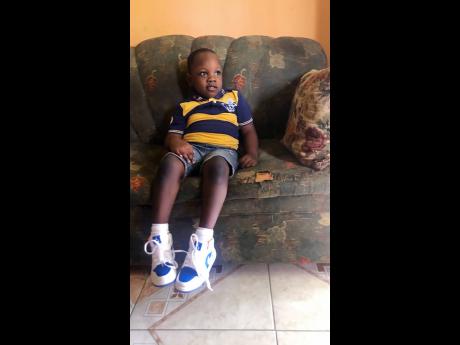 One of Jo-Anna Gowdie's greatest wishes is to see her only child, Jayden Stoddart, make his first independent step.

At five years old, when most children are skipping along with their peers or riding their bicycles, little Jayden is unable to stand or walk due to a medical condition called spastic cerebral palsy (CP). Children with spastic CP have stiff muscles either in the upper or lower part of the body, or both. It may also affect one or both sides of the body.

The 31-year-old Gowdie, who hails from Montego Bay, St James, is seeking the public's assistance for Jayden to undergo surgery at the St Louis Children's Hospital in Louisville, in the US state of Kentucky. The cost for the operation is US$40,000 (approximately J$6 million), but a recently created GoFundMe account has only raised US$700.

"I would love to see my son walk on his own. He is getting bigger, which means he is getting weightier to carry around. I want to see him reach his true potential. He was suppose to do an operation to correct his condition at the Bustamante Hospital for Children, but they are not doing any surgery now because they are trying to fight COVID. He cannot function as a normal child. I have reached out to the hospital in the United States, but mi nuh have dem type a money deh. I have created a GoFundMe account but it is going slow, so I am just asking for any assistance that I can get," she said.

Jayden was born at the Cornwall Regional Hospital in St James. Gowdie stated that she had a normal pregnancy but encountered a bit of difficulty during labour.

"They did a procedure called a soft push where they literally forced him to come out. So after he was born, he was literally flat. He cried only once and they stated that he was developing seizures and they would have to give him some medication. They, however, stated that if they gave him the meds, he may have difficulty walking and talking but they didn't have much options," she said.

Stoddart said that at age one, her son was not creeping and said doctors told her that the infant was a bit slower because his head got squeezed during birth, which affected his motor function.

"They said he was probably a late walker but at age two, he still was not able to walk independently. As a result, I have been back and forth at different hospitals across the island, including Bustamante Hospital for Children which diagnosed him with CP," he said. Gowdie said Jayden has a walker that he pushes to help him get around.

"He speaks like a little baby but I understand him. He is not able to go to school because of his condition. There is only one school that is willing to accept him, but the school fee is $75,000 per term and I can't afford it, so I am saving so he can attend classes next term. I am just asking for some help to reach the target. The hospital is willing to accept him at any time, but I don't have the funds," she said.