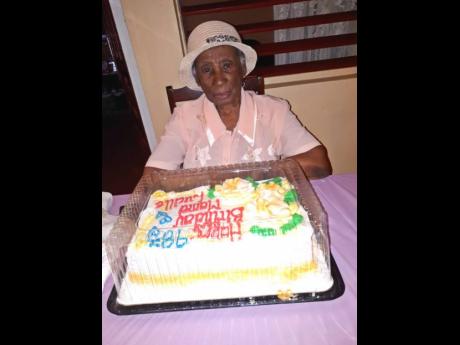 "I pulled my presents and talk to my family and friends and watch church service on television. It was a nice day Miss," said Holmes.

Holmes was born to Cleopatra Bartley and Nathaniel Mitchell. Her mother lived to 97 years old, but her father died when she was seven.

"All my breddas and sistas live long, too, because all a them live pass 80; me last sister dead three years ago," she said.

Holmes was blessed with seven children, whom she got with her husband of 41 years, Uriah Holmes. He died at age 83.

"I use to go the backra house and do domestic work and take care of the children and the family, and my husband use to stay home and farm," said Holmes. "But I make sure my kids grow good and have manners because me was a strict woman of God," she said

The centenarian says she has an undying love for her creator, who, through his love and mercies, have taken her past the 100 mark.

"It is the Lord, Jesus, who takes care of me and hold my life in his hand. Until Jesus is ready and say my time has come, I will be living because he is not ready for me," she explained.

Her relationship with God undoubtedly influenced the way in which Holmes raised her children. An account given by her daughter, Georgia Holmes-Burke, mirrors the exhalation given in Proverbs 22:6 -- 'Train up a child in the way he should go, And when he is old he will not depart from it.'

"She instilled certain values in us that stayed with us even when we are old. She taught us to have manners and we cannot be rude to the elderly," Holmes-Burke said.

"Mama love to pray, she will be in her room praying for everybody for hours," she added.

Holmes is loved and respected throughout her west Portland community, and it is not uncommon for persons to ask her to intercede on their behalf, through prayers.

"Them come and say 'Mrs Holmes, pray for me', if them nuh feel well, or anything," the prayer warrior, who is a member of the School of the Ambassadors Ministries Church of God, said.

Holmes-Burke, who says that her mother loves porridge, especially when it is made of corn, arrow root and banana, has no known illnesses, and that she still reads, writes and sews well, without glasses.