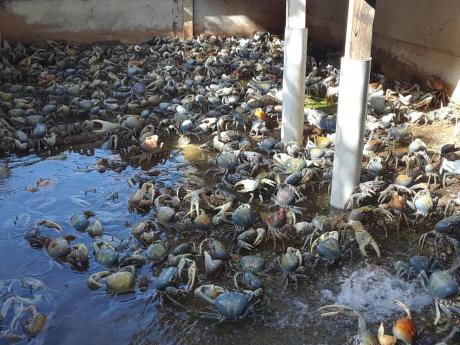 One of Morris’ crab pens before thieves struck this week. 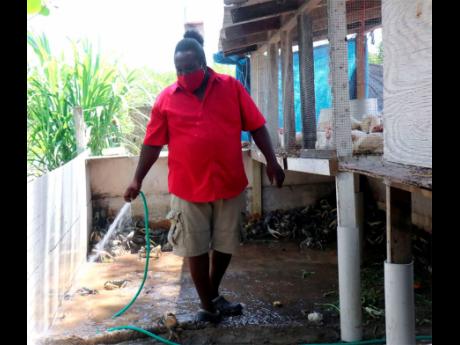 Morris is looking to rebound after he woke up early Wednesday morning to find that thieves stole most of his crabs.
1
2

It was the ominous barking of his dogs around 2 a.m. on Wednesday that alerted crab farmer Jermaine Morris that his pen had been broken into.

Upon making checks he discovered that the majority of his crustaceans had been stolen.

"This a nuh the first time. About one and half year ago dem thief about three dozens of my crab and those were some big ones, some you don't usually see often," Morris told THE STAR. "But this a the most I have ever lost. I can't even tell how exactly me lose because me nuh know how much dozen was in the pen, every day we add more."

Morris' crab farm was featured in THE WEEKEND STAR, last Friday. Morris has been catching and rearing crabs as a viable business since 2018. He said he was in total disbelief when he saw the nearly empty pen yesterday and is particularly worried about the financial struggles he will now face.

"I'm really at a loss now because it is going to take us a while to get back all that was stolen. The (crab) hunters them need their money as well so all that money that I would have paid out to them have gone down the drain because I don't have the crabs to make it up back," he said.

However, there is hope for Morris. Having seeing his plight, farm store PreeLabs Limited has expressed interest in donating a security system to him to try to prevent further larceny.

"We're going to offer him a system with sensors and an app that can notify him whenever someone is by the pen and would also allow him to monitor remotely," the company's CEO YekiniWallen-Bryan said. "We're all angered and saddened by his story because it's a story that we hear time and time again. We want to see his business thrive and want to help him realise that goal."

Morris said the news was the highlight of his burdened day.

"When I heard that a company wanted to give me a security system for the farm, it was the best part of my day," he said. He also expressed gratitude to THE STAR for the highlight that the publication's story brought him.

"My phone has been ringing and WhatsApp right through ever since the story was published and I really do appreciate it." he added.

Those who wish to donate to Morris may contribute to his National Commercial Bank (NCB) Falmouth Branch, Account # 444246057 in the name Jermaine Morris.