Chinese vaccines sweep much of the world, despite concerns 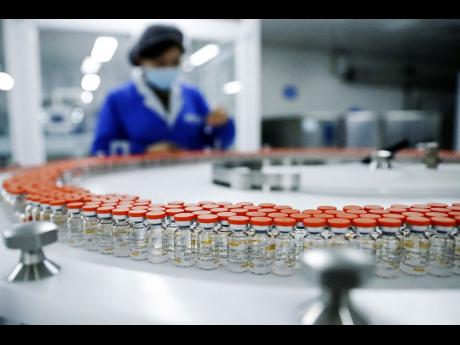 In this Dec. 23, 2020, file photo released by China's Xinhua News Agency, a Sinovac worker checks the labeling on vials of COVID-19 vaccines on a packaging line in Beijing. (Zhang Yuwei/Xinhua via AP, File)

TAIPEI, Taiwan (AP) — The plane laden with vaccines had just rolled to a stop at Santiago’s airport in late January, and Chile’s president, Sebastián Piñera, was beaming. “Today,” he said, “is a day of joy, emotion and hope.”

The source of that hope: China – a country that Chile and dozens of other nations are depending on to help rescue them from the COVID-19 pandemic.

China’s vaccine diplomacy campaign has been a surprising success: It has pledged roughly half a billion doses of its vaccines to more than 45 countries, according to a country-by-country tally by The Associated Press.

With just four of China’s many vaccine makers claiming they are able to produce at least 2.6 billion doses this year, a large part of the world’s population will end up inoculated not with the fancy Western vaccines boasting headline-grabbing efficacy rates, but with China’s humble, traditionally made shots.

Amid a dearth of public data on China’s vaccines, hesitations over their efficacy and safety are still pervasive in the countries depending on them, along with concerns about what China might want in return for deliveries.

Nonetheless, inoculations with Chinese vaccines already have begun in more than 25 countries, and the Chinese shots have been delivered to another 11, according to the AP tally, based on independent reporting in those countries along with government and company announcements.

It’s a potential face-saving coup for China, which has been determined to transform itself from an object of mistrust over its initial mishandling of the COVID-19 outbreak to a savior.

Like India and Russia, China is trying to build goodwill, and has pledged roughly 10 times more vaccines abroad than it has distributed at home.

China has said it is supplying “vaccine aid” to 53 countries and exports to 27, but it rejected a request by the AP for the list.

Chinese experts reject any connection between the export of its vaccines and the revamping of its image.

China has targeted the low- and middle-income countries largely left behind as rich nations scooped up most of the pricey vaccines produced by the likes of Pfizer and Moderna.

And despite a few delays of its own in Brazil and Turkey, China has largely capitalized on slower-than-hoped-for deliveries by U.S. and European vaccine makers.

Like many other countries, Chile received far fewer doses of the Pfizer vaccine than first promised.

In the month after its vaccination program began in late December, only around 150,000 of the 10 million Pfizer doses the South American country ordered arrived.

China’s vaccines, which can be stored in standard refrigerators, are attractive to countries like Indonesia, a sweltering nation that straddles the equator and could struggle to accommodate the ultracold storage needs of vaccines like Pfizer’s.

The bulk of Chinese shots are from Sinovac and Sinopharm, which both rely on a traditional technology called an inactivated virus vaccine, based on cultivating batches of the virus and then killing it.

Some countries view it as safer than the newer, less-proven technology used by some Western competitors that targets the coronavirus’ spike protein, despite publicly available safety data for the Pfizer, Moderna and AstraZeneca vaccines and none for China’s.

China’s vaccine diplomacy will only be as good as the vaccines it is offering, and it still faces hurdles.