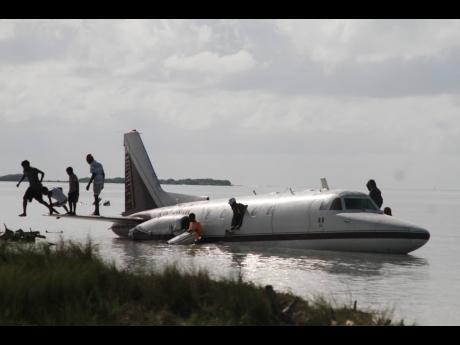 Onlookers at the site of Saturday’s plane crash in Rocky Point, Clarendon, yesterday. 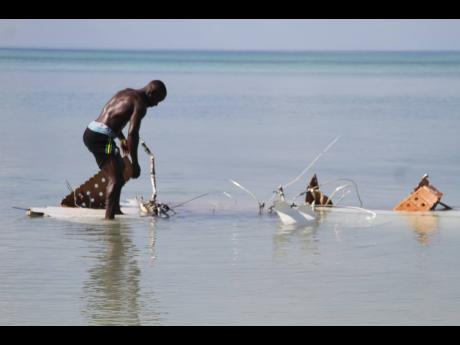 This man was among several persons who brave the crocodile-infested waters yesterday to get close to the wreckage of the twin engine Cessna that crashed at White Sands Beach, Rocky Point, Clarendon on Saturday.
1
2

The bustling fishing village of Rocky Point in Clarendon may be best known for its aquatic creatures, but has a rather dark side as it is considered a transshipment point for drugs and guns.

The seaside community has again been cast into the spotlight following the crash of a small aircraft in the sea on Saturday.

Up to press time yesterday, members of the security forces are continuing their search of areas surrounding the White Sands Beach, Rocky Point, where the aircraft - a Cessna XB-JMR twin engine - made a landing on the coast.

Reports from the Lionel Town police are that about 7 p.m., they were summoned to the location and on their arrival the aircraft was checked. However, no passengers or cargo were seen on the plane or in its vicinity. The police said that several checks have been made at nearby hospitals, however, medical personnel reported that no one arrived at their facility from the crash site.

"I heard it was engine difficulty because some guys said they saw black smoke coming from the engine, and the pilot turned on a bright light, trying to find a place to land," one resident told THE STAR.

According to one resident, the fishing village has been a capital for the transhipment of drugs, due to its "nice safe harbour" and secluded location.

"The sea has a nice harbour... it's not rocky, so the boats can travel without fear of damage. There are places where they can store their stuff and then ship it out. They do it on this side and out on the village," the resident said.

When asked what "stuff" the resident referred to, the response was, "ganja and cocaine," adding, "There are lots of places here where there is no population, so there's nobody to see the operation".

Over the years, fishermen in Rocky Point have reportedly reeled in big catches from "strayed" cocaine found at sea, THE STAR was told. "It is regular occurrence for them to find ganja and cocaine out there. When planes doing drop offs, and they have bad weather, one and two of the parcels might stray and fishermen find it," a resident said.

"When they find it you see people go from poverty to riches, because sometimes they find thirty or twenty-five kilograms and one kilogram is a million dollars, so all of a sudden they can buy a house or a car. Them have who fi buy it. Them have them contacts ... one phone call."

Asserting drug smuggling as "big business" in Rocky Point, the native claimed that sales from cocaine support the lavish lifestyles of many persons.

Head of the Clarendon police, Senior Superintendent Glenford Miller, told THE STAR that drug smuggling is a prevalent issue not just in Rocky Point, but on the parish's southern coast.

"Most of the times, drug peddlers utilise these routes to transport their drugs, so what we try to do is partner with our marine police officers to see how best we can battle what is happening on the southern side of Clarendon where especially the sea is concerned," said Miller.

Yesterday, as police looked for clues that could help them understand Saturday's crash, several persons braved crocodile-infested waters to the crash site. Some persons successfully made off with items such as mats and diving equipment, while others were not so lucky as they were intercepted by cops who confiscated the stolen items.