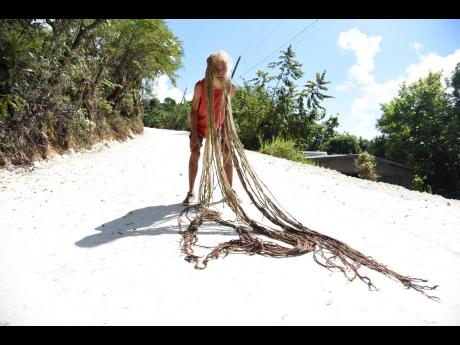 Rupert Scott, whose locks are about 20 feet long, shows off his hair in his community of Middleton, St. Thomas. 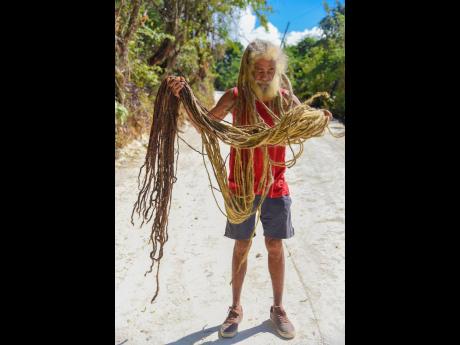 If you are in Middleton, St Thomas and you want to try and find Rupert Scott, all you have to do is ask about the man with the locks. Scott is not the only person in the community with dreadlocks, but his locks are the longest.

The Rastafarian's dreads could very well be the record holder for having the longest locks in Jamaica, if not in the world.

Scott told THE STAR that taking care of his hair has aided its growth and health. Cleansing it, he said, can take as much as three hours. After washing for about 45 minutes, the majority is draped over a clothesline for partial drying. A complete drying may take as many as four days.

"It is about over twenty feet now. I wash it like once a month and it takes me two bottles of shampoo and one conditioner, and four days to dry properly. I use tuna or aloe vera as moisturiser, and I ensure that I keep it covered and wrapped up from dust, especially now since there is road work going on," he said.

The cheerful Scott, who nearly lost his locks years ago, told THE STAR said that his hair has been turning heads both in Jamaica and overseas.

"I remember going to France and I was like a movie star. There were paparazzi everywhere and persons just want to take photos with me. The white women dem love mi off, they are always marvelled by me and my locks," said the man who is hoping that his locks will one day enter the Guinness Book of Records.

The possibility of his locks reaching ultimate record-breaking lengths would not have been possible if prison authorities in the United States of America had their way. He said that he was locked up overseas and while in penitentiary, they wanted to cut off his dreads.

"When you check it out now, me and the other dreadlocks Jamaicans wrote a petition to the judge in New York stating that this is our religion and we don't think it is right for them to cut off our hair. Thankfully, the judge approved," Scott told THE STAR.

The St Thomas native have been growing his locks since 1968, after moving out of his parents' house. He, however, stated that he was inspired to wear locks after his mother started dating a Rasta man. Surprisingly, Scott said he was not a fan of Rastafarians or anyone who grew their hair in locks when he was a child.

"I was afraid of Rastas because back in those days, grown folks use to tell us that they were the black-heart man and they would kill us and take out our organs," Scott told THE STAR.

"If I ever see a Rastaman I would run and tear down the place and cry. In those times, we were illiterate to a lot of things, but thankfully we have grown past those things," he said.

Much of a comedian, Scott had the news team doubling over in laughter just seconds after meeting him on his verandah. As he unwrapped his hair that stretches from his verandah into his yard, the father of 18 said he is currently seeking a second wife as he strongly believes that every black man should have more than one 'queen'.

"I am almost 71 years old and I feel like 19, I am in my youth and all I need now is another two wives. One of my wives past away two years ago, and I have one leave now, so I am seeking another two," Scott said.

"I just want two nice women, but no teenagers though. Maybe I am greedy but I believe a man suppose to have any amount of wives him want, as long as him can maintain them and the children," he said.