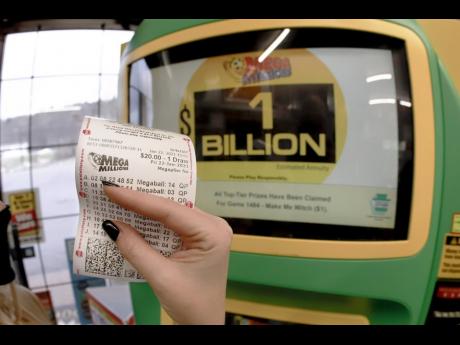 A patron, who did not want to give her name, shows the ticket she had just bought for the Mega Millions lottery drawing at the lottery ticket vending kiosk in a Smoker Friendly store, Friday, Jan. 22, 2021, in Cranberry Township, Pa. (AP Photo/Keith Srakocic)

DETROIT (AP) — One winning ticket for the $1 billion Mega Millions jackpot,  the third-largest lottery prize in U.S. history, was bought in Michigan on Friday.

The winning numbers for Friday night’s drawing were 4, 26, 42, 50 and 60, with a Mega Ball of 24. The winning ticket was purchased at a Kroger store in the Detroit suburb of Novi, the Michigan Lottery said.

“Someone in Michigan woke up to life-changing news this morning, and Kroger Michigan congratulates the newest Michigan multimillionaire,” said Rachel Hurst, a regional spokeswoman for the grocery chain. She declined to comment further.

The Mega Millions top prize had been growing since Sept. 15, when a winning ticket was sold in Wisconsin.

The lottery’s next estimated jackpot is $20 million.

Only two lottery prizes in the U.S. have been larger than Friday’s jackpot.

Three tickets for a $1.586 billion Powerball jackpot were sold in January 2016, and one winning ticket sold for a $1.537 billion Mega Millions jackpot in October 2018.

The jackpot figures refer to amounts if a winner opts for an annuity, paid in 30 annual installments.

Most winners choose a cash prize, which for the Mega Millions estimated jackpot would be $739.6 million before taxes.

In Grosse Ile, a suburb south of Detroit, 126 people bought more than 600 tickets for the Friday drawing but didn’t win the jackpot.

They hoped to win enough money to replace a publicly owned bridge on their island in the Detroit River that has been closed indefinitely for major repairs.

The only other transportation option for the island’s 10,000 residents is a privately owned toll bridge.

“We used this to lift our spirits and dream a little bit,” said organizer Kyle de Beausset. “Of course we’re open to any help with the bridge, but I can’t imagine the winner would want to finance it.”

The odds of winning a Mega Millions jackpot were incredibly steep, at one in 302.5 million.

The game is played in 45 states as well as Washington, D.C., and the U.S. Virgin Islands.