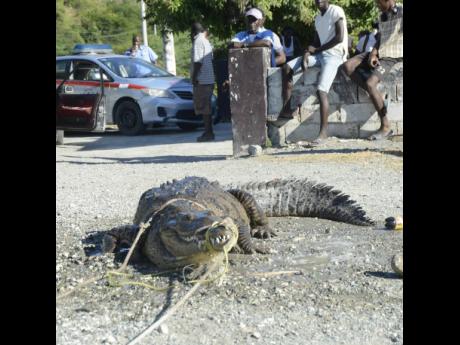 Environmentalists have renewed the call for Jamaicans to take more responsibility of the ecosystem, after they found various objects, including condoms, in the stomach of a dead crocodile at the Hellshire Sewage Treatment Plant on Monday.

Damion Whyte, chairperson for endangered species recovery group at the National Environment and Planning Agency, surmised the crocodile was killed by a larger one as it is currently their mating season.

"There were five condoms, two maxi pads, paper towels, candy wrappers, bird feathers, snails and other plastic content. There were also stones but that's normal. It was quite upsetting when you open up the stomach and you see just pure plastic, it's very upsetting. The crocs don't really know any better and it's because of us as humans that we are having this effect on them," Brown said.

Joel Brown, curator at the Hope Zoo, who was part of the team that found the crocodile, believes more can be done to help protect their population through education and outreach.

"They don't prey on people, in fact they are more afraid of people. As well as plastic pollution is a huge thing and we need to be more careful. It's part of our culture, it's on the coat of arms. I'm not expecting people to love crocs as much as I do but just protecting our environment in general, then the crocs will benefit from that," he said.

Last year, Brown found another crocodile with 22 plastic bags in his stomach.

Whyte said that while he and his team are currently studying the crocodile population, he is hoping this situation will bring awareness to the dangers humans pose to crocodile habitats. "Don't try hurt them, don't try catch them. You just have to find a way to coexist with them. Just respect them, don't harm them. What was found in the animal's stomach was surprising and it goes to show that we as humans have to be careful what we do," Whyte explained.