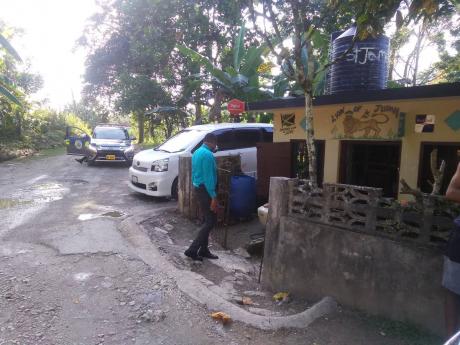 Detectives at the scene in Bottom Cambridge, St James, where a Canadian national was murdered on Tuesday night.

A Jamaican-born Canadian national is one of two persons murdered in Cambridge, St James, between Tuesday night and Wednesday morning.

He has been identified as Collin Wright, 46, otherwise called 'Greg', of Stainton Drive, Mississauga, Canada. He was visiting relatives at a section of the community known as Bottom Cambridge. The other victim is known only as 'Tupak', of Bullman Road in the community.

Reports by the Cambridge police are that shortly after 7 p.m., Wright, who arrived in Jamaica for vacation on December 20, was sitting in the yard with his cousin who operates a shop.

Two men posing as customers ordered cigarettes and rum, but were informed that there was none available. They left but later returned, and one of the men brandished a handgun and opened fire hitting Wright multiple times. Wright ran and fell a short distance away. He was shot several times before the gunmen ran. They then fired at a group of residents as they made their escape.

The police were summoned and upon arrival, Wright was rushed to the Cornwall Regional Hospital, where he was pronounced dead.

Several residents told THE STAR that Wright was known to be a honest, hard-working individual, and that he had left Jamaica when he was 16 to live in Canada, so they are puzzled about a possible motive.

The police were again summoned to the community about 8:30 a.m. Wednesday, following the discovery of Tupak's mutilated body on Bullman Road.

Reports are that a farmer stumbled on the body and summoned the police. Tupak was seen lying face down in a pool of blood, with multiple chop wounds to his face, shoulder and upper body.

The scene was processed, and the body removed to the morgue for a post mortem. Residents said that Tupak had recently returned to the community but had been acting strangely. One person said he had been staying in a broken down house in the area.

Seven persons have been murdered in St James this year.