Expecting trouble, DC locks down a week before inauguration 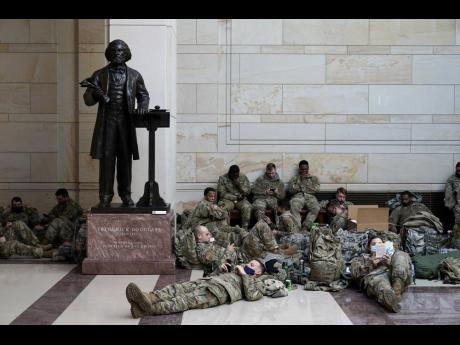 Troops hold inside the Capitol Visitor's Center to reinforce security at the Capitol in Washington, Wednesday, Jan. 13, 2021. (AP Photo/Alex Brandon)

WASHINGTON (AP) — All through downtown Washington, the primary sound for several blocks was the beeping of forklifts unloading more fencing.

There were no cars or scooters and seemingly no tourists Wednesday, just the occasional jogger and multiple construction crews at work.

The U.S. Capitol that proved such a soft target last week was visible only through lines of tall, black fence.

Two blocks from the White House, a group of uniformed National Guard troops emerged from a tour bus and headed into a hotel as a state of lockdown descended on Washington that will last through the Jan. 20 inauguration.

Last week’s “violent insurrection” at the Capitol by supporters of outgoing President Donald Trump has “impacted the way we are approaching working with our federal partners in planning for the 59th inauguration,” Bowser said Wednesday.

The FBI has warned that armed protests by violent Trump supporters were being planned in all 50 state capitals as well as in Washington for the days leading up to the inauguration of President-elect Joe Biden.

Between the pandemic and the security threat, Bowser is flat-out asking people not to come to the District of Columbia for the inauguration.

And at Bowser’s request, a National Special Security Event declaration was moved up to Jan. 13, a distinction which she said “puts in place an entirely different command and control structure” for security.

The NSSE status is normal for a presidential inauguration and other major events like an international summit or the Super Bowl.

But it’s rare to start the lockdown so far in advance of the event.

Starting Wednesday, Bowser said, anyone inside the inauguration perimeter might be stopped and questioned.

Starting Friday, all parking garages in the downtown restricted zone will be sealed through the inauguration.


Bowser is also being pushed to deny lodging options to potentially violent protesters.

In addition to the threat of violence, the activist groups say Trump supporters are a threat to the health of hotel staff for their general refusal to wear facemasks amid the pandemic.

Several downtown hotels, including one which had become a favorite hangout of the militant Proud Boy faction, chose to avoid trouble by closing last week.

On Wednesday, Airbnb announced it was cancelling all reservations in the Washington metro area.

On the ground, much of the most visible security will come in the form of more than 15,000 National Guardsmen from multiple states, some of them armed.

According to officials, the number of Guardsmen who will actually be carrying guns will be limited.

Some Guard members nearer the Capitol will have long guns, and others will have their sidearms.

National Guard members operate under strict rules of engagement on the use of force.

But generally speaking, troops can use lethal force to protect the lives of others and themselves.

Officials also said that while 15,000 Guard members have been activated, more may be called. D.C. Police Chief Robert Contee estimated Wednesday that more than 20,000 National Guardsmen would be active in the District of Columbia on Inauguration Day.