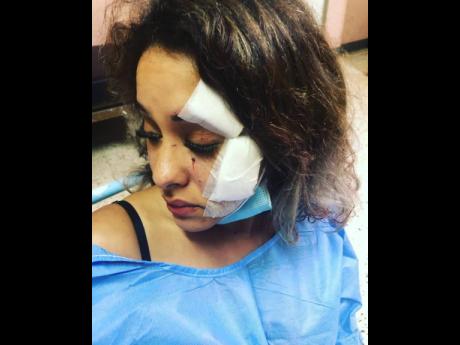 Izzy Rawshdeh sustained injuries to her face and had to be taken to receive medical assistance at hospital. 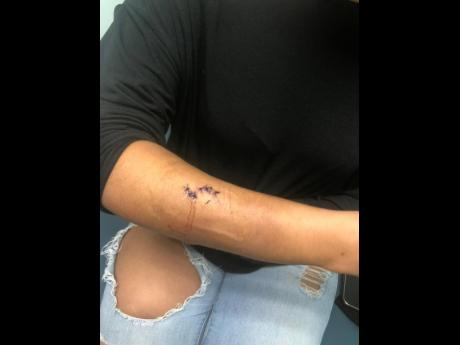 Izzy Rawshdeh sustained injuries to her arm, which required stitches.
1
2

What was intended to be a romantic holiday getaway for an American couple, Izzy and Muawea Rawshdeh, quickly turned sour after Izzy was allegedly attacked and injured by another female visitor at a resort on Jamaica's south coast.

Izzy, 32, and her husband are first-time travellers to Jamaica. They came to the island to celebrate their sixth wedding anniversary, as well as to experience a Caribbean Christmas.

However, what should have been a memorable experience became a most forgettable one after Izzy was allegedly attacked by a guest. Police reports state that Izzy was cut by a wine glass. She sustained injuries to her face and arm, and had to be taken to receive medical assistance at hospital.

"During the ride to hospital, my hand was numb. I had lost so much blood. To me, it was the scariest thing in the world. I didn't think I was going to make it," she told THE STAR. "I kept looking at my husband and telling him I love him. It was really traumatic and scary," she said, in-between tears.

The traumatised visitor said that the person who attacked her was also a tourist, and both were guests at Sandals South Coast, where the incident allegedly occured. She said the frightening incident took place on Christmas Eve, shortly after an entertainment event ended about 10 p.m. She alleged that the woman, a complete stranger, yelled at her and said: 'Next time you need to wear something different. You need to change those f$@king clothes.'

"I was wearing shorts and a lace cover-up, and mind you, this is a beach resort, everyone is wearing that," Izzy said.

"I turned around to say, 'Don't tell me what to do', and before I could finish my sentence, she grabbed a glass she had in her hand and threw it in my face," Izzy alleged.

The tourist was taken to the Black River Hospital in St Elizabeth, where she received five stitches in her face and eight stitches in the arm. A report was made to the Whitehouse Police Station in Westmoreland and the alleged aggressor was later charged with unlawful wounding. The matter is currently before the court.

Contacted by THE STAR, Sheryl McGaw-Douse, the group manager for communications and public relations, said "The incident involving two guests is now a police matter and we are therefore unable to comment further".

Izzy said the incident had hampered the romantic experience that she had planned for her wedding anniversary, which she said included a candlelit dinner overlooking the beach.

"The surprises were off, I just wanted to leave. I couldn't do it," the tourist said.

Izzy and her husband left the island on Sunday with a bad taste in their mouths, despite the fact that they were striking up a lovely relationship with the island paradise.

"It really sucks, because every single person in Jamaica has been absolutely amazing. We have been to so many countries and Jamaicans are the best people we have met, but this incident really tainted it for me," Izzy said.

Now, she plans to sue her alleged attacker for ruining her vacation. "I need help getting justice from her, because that's not fair what she did to me. I don't know her, and it doesn't make sense someone, out of nowhere, attacks you that way. I don't want her to get away with this," Izzy said.