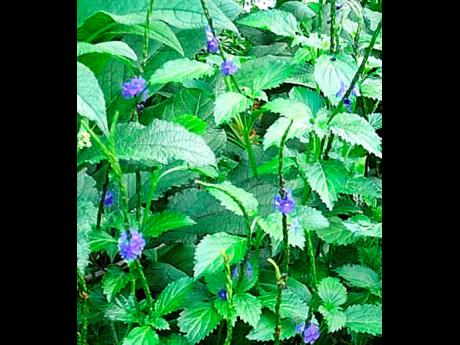 A herb which is allegedly treating persons infected with COVID-19 is now in high demand in Portland and St Thomas.

The vervine weed as it is called, which blooms a purple-coloured flower, is now being sought by vendors and higglers, who are selling it to persons who have tested positive for the dreaded coronavirus that has claimed hundreds of thousands of lives globally. Jamaica, up to yesterday, has 5,395 cases, after 126 new positives were recorded. There are 119 positive persons in hospital, with 31 moderately ill patients and seven critically ill.

"All I can tell you is that this bush really works," Mario 'Ally' Bignal, a resident of Boston, Portland, told THE STAR. "Its healing properties are remarkable. More than 20 people in Boston have been treated with this herb and they have fully recovered. This bush is in high demand at this time, and we now have people coming into Boston collecting van loads of this herb. I don't need to be a rocket scientist to know that they are simply taking the herb elsewhere to sell."

Bignal said several persons had tested positive for COVID-19 in the community and their conditions improved significantly after taking the herb.

"It (vervine weed) carries a bit of an unpleasant smell and therefore some persons tend to mix the vervine weed with fever grass so as to reduce the smell. There have been many doubters, but those very same ones have since admitted to the healing power of this magic herb," he said.

The herb is best prepared after allowing it to remain overnight. According to Jamaican folklore, vervine weed is traditionally consumed as a tea to treat nervousness.

It also allegedly has other uses, including as a treatment for measles, heart conditions, coughs and colds, colic, jaundice and to help babies sleep.

Bignal is alleging that in one instance, an elderly woman in Boston tested positive for COVID-19, but refused to take the herb. However, as her condition worsened, she finally tried it.

"In a little over a week, her condition improved significantly and today she is COVID-19 free. All those, who were diagnosed with COVID-19 in Boston and have taken the herb, have fully recovered. This is the reality and it is no joke," Bignal said.

The World Health Organisation has stated that "there is no specific medicine recommended to prevent or treat the new coronavirus" to date.