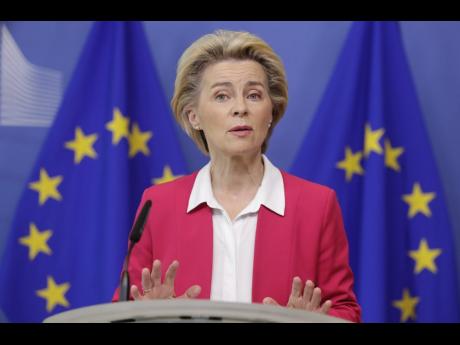 The move comes after years of chaos and dispute among the bloc’s 27 nations over the handling of migrants and refugees amid a recognition that the current EU system for deciding whether they should receive protection or be sent home has failed.

“The old system to deal with it in Europe no longer works,” European Commission President Ursula von der Leyen told reporters in Brussels, adding that the “New Pact for Migration and Asylum” offers Europe “a fresh start.”

The arrival in 2015 of well over 1 million migrants, mostly refugees fleeing war in Syria, sparked one of the EU’s biggest political crises.

EU nations have fought since over who should take responsibility for the migrants, with front-line Mediterranean nations like Greece, Italy, Malta and Spain demanding more help from their EU neighbors.

The arguments rage on even though the number of unauthorized migrants has dwindled sharply in recent years. Some 140,000 people arrived last year, compared to around 2 million migrants who entered legally, the European Commission says. Turkey, Lebanon and Jordan have had to cater to far more.

EU nations have responded in various ways, from erecting razor-wire border fences to ignoring emergency calls from overcrowded smugglers’ boats in the Mediterranean. Some migrants have been left to languish on ships for weeks rather than being allowed into safe harbors.

Aid groups and European citizens face criminal charges for their efforts to save lives.

The new plan hinges on the fast-track screening of migrants arriving at Europe’s borders without permission. It would be completed within 5 days.

People would then be sent into an asylum track if they qualify for protection, or they would be prepared for deportation.

Both procedures would take 12 weeks and the migrants could be held in detention.

From there, EU members could choose to help ease the load on countries that have seen the most migrant arrivals by sea  like Greece, Italy, Malta and Spain,  by taking in some refugees or providing other support.

The migration proposals are sure to spark heated debate among EU countries but the commission is urging them, and the bloc’s parliament, to adopt the reforms by year’s end.