Contract signed to improve water supply in sections of Kingston 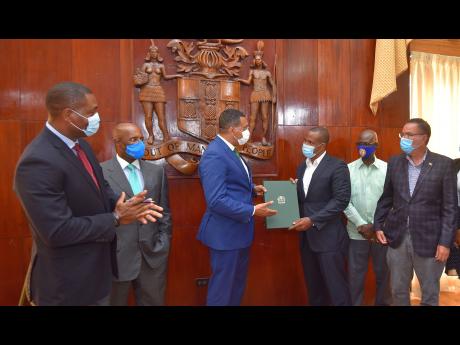 The Government has signed a contract valued at US$25 million for a transmission main upgrade that will improve the water supply between Six Miles and Blake Road in Kingston.

Also signing were Minister without Portfolio in the Ministry of Economic Growth and Job Creation, with responsibility for Water and Housing, Daryl Vaz; and Director, M & M Jamaica Limited, Richard Mullings.

Prior to the contract being signed, the Prime Minister gave a breakdown of the project.

“This project will connect to the pipe that we already laid along the Mandela Highway."

"It will replace the old mains along Spanish Town Road to Blake Road, and this will ensure that the proper water pressure and consistent supply of water can reach the communities along that area and go as far as to Central Kingston,” Mr. Holness said.

“That will mean a dramatic change in the condition under which people live in these communities. It will mean an absolute improvement in their quality of life,” he added.

He pointed out that the laying of the pipes may cause some dislocation; however, new technology will be used, such as directional drilling, which will tunnel underground for the mains to be installed underground, where possible.

“This new main that is laid will last us another 60 years before we will have to do any significant maintenance to it, so we consider this to be a nation building project."

"Putting in this main will allow for greater investment and greater expansion of residential and commercial development along that corridor, which will be complemented by the roads that are in place, the sewerage system that we have put in place and, of course, the improvement in telecommunications,” Mr. Holness said.

For his part, Chairman, National Water Commission, Senator Aubyn Hill, said thousands of people who depend on the supply where the upgrade will be done, will benefit socially, domestically, health wise and monetarily.

“The National Water Commission’s mission is to ensure that underserved areas receive quality potable water on a consistent and reliable basis. We’re very focused on that objective. The signing of today’s contract is a decisive step in the realisation of that mission,” Mr. Hill said.

“We’re upgrading transmission mains that will bring enormous benefits to residents in the Six Miles areas. The communities that will be helped are major areas in the Corporate Area stretching from Duhaney Park to downtown Kingston,” he added.