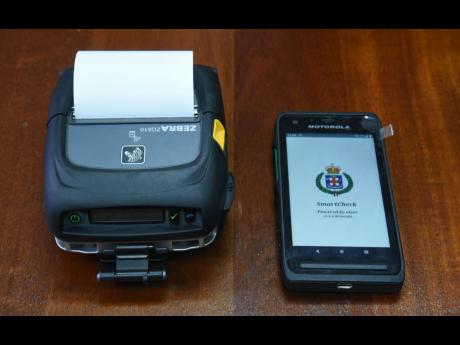 A smart android device and portable printer that will be carried by Traffic police in the Corporate Area to facilitate the electronic issuance of traffic tickets.

In a few weeks, Traffic police in the Corporate Area will be equipped with 100 smart android devices and portable printers to facilitate the electronic issuance of traffic tickets.

The devices will also give officers the ability to reference driver and vehicle information, including ticket history, outstanding tickets and warrants.

The rollout of the devices form part of the Government’s efforts to modernise the Traffic Ticket Management System (TTMS), to combat indiscipline on the nation’s roads and improve enforcement of the law.

Through the programme, all traffic tickets issued with the devices will instantly be uploaded to the centralised TTMS database, which is accessible by the Jamaica Constabulary Force, the Traffic Courts and all other government agencies that depend on accurate, timely traffic ticket information to fulfil their mandates.

He said once the pilot programme has ended, more devices will be purchased to staff the entire Public Safety & Traffic Enforcement Branch (PSTEB) and all Traffic police across the island.

“It eliminates a number of issues. When an officer writes a ticket, it goes straight into the computerised system, so there is no way to tear it out, to remove it from the records,” the Minister pointed out.

He said implementation of the system will eliminate the inefficiencies that have been caused by the historical reliance on manual paper-based ticketing and data-entry processes.

Dr. Chang added, as well, that it prevents “any kind of discretion, which I think is what we want to remove from law enforcement”.

“If necessary, you can have the court decide afterwards that there were mitigating circumstances, but it is not left to the officer on the road to make any kind of discretionary judgement, which we have to try and eliminate, because when that happens, unfortunately in our society, it’s the police that get blamed,” he said.

Dr. Chang noted that the ticketing system also offers improvement to the citizen’s experience by emailing a digital copy of the traffic ticket to the offender and making the ticket information immediately available to Tax Administration Jamaica, allowing the offender to pay their traffic fines online.

“That record will be at the Tax Office and at the Court Management Office, which means that if you don’t go to court, we can issue a warrant immediately without any delay,” he said.

Dr. Chang noted that the system will ensure that those who breach the Road Traffic Act will be charged.

Dr. Chang added that in December 2019, the Ministry of National Security procured 12 laptops, three desktops and 14 printers to support the improvement of Traffic Ticketing operations in the Traffic Courts.

The Minister said that the overall improvement of the system, as well as the installation of fibre optic cable in the courts, will enable better connectivity among the agencies.

Meanwhile, Senior Director, Technology Transformation in the Ministry, Arvel Grant, informed that approximately $40 million was spent to acquire the equipment for the pilot phase of the project.

He said following consultations with PSTEB and the Technology Branch of the Ministry, the pilot will run for approximately three months.

The TTMS is a centralised, web-based system that was introduced in September 2010 by eGov to improve ticket management from the point where tickets are issued to an offender to either being paid at the tax office or adjudicated in court.

The major update ensures accurate information is available to government agencies, such as the Jamaica Constabulary Force and the Courts, among other stakeholders.

The software was developed by eGov Jamaica through consultation with the Ministry of National Security and the Jamaica Constabulary Force’s Technology Branch and Public Safety Branch.

In order to support the enforcement of Public Order and Safety operations through technology, the handheld ticketing software is integrated with the Government of Jamaica databases for driver’s licences, motor vehicle registrations and vehicle insurance, allowing officers to check for expired licences, insurance and registration and also giving officers real-time access to other internal JCF databases, such as wanted persons and stolen vehicle databases while in the field.