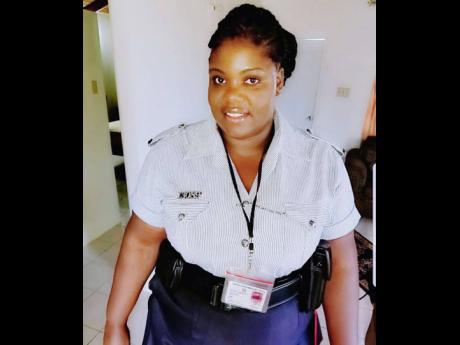 Lotoya Garriques is being hailed as a good Samaritan after she took an active interest in the life of a toddler who she helped rescue from an abusive situation. Last Monday, the cop who is stationed at Clark's Town Police Station in Trelawny, received information about a child being physically abused in the parish, but when she and her team got to the location, what they saw was nothing that they had prepared their minds for. The child, *Baby Andre, a two-year-old boy, had been viciously beaten, allegedly by his father, who has since been charged.

"He was in a bad state. It was heartbreaking. He had a bloody kerchief wrapped around his head and his eyes were badly swollen. His entire body had bruises and scars that showed that it wasn't just a one-day incident or a one-off thing," she said.

Baby Andre was rushed to the Falmouth Hospital, where he is currently admitted. A few other children, who also resided at the premises, were placed into state care after being examined by a medical team. Garriques has since taken a personal interest in the baby.

"When I took him in my hands he felt so frail. Probably if we had delayed a little longer, he may have died. He was not responsive and was just staring at us. Myself, along with Woman Constable Shelly Ann Allen, has not only visited him, but we have purchased clothes, and just about everything that a baby needs, for him. I have visited him daily and I really feel a connection to him," she said.

A video of the police officer playing with Baby Andre has been making the rounds on social media and has garnered hundreds of comments from persons, who all praised the law woman for her charitable deed.

"This is something that I am always doing, but the only difference is that this one went viral, thanks to my mentor, Sergeant Wallace, who uploaded the video. Last year, he highlighted another situation where I fully funded a teenager after getting her enrolled in a high school. She was deemed by some as being a disrespectful child, but beyond all of that I saw that this child had potential and she was out of school for over a year, so I got her in a school and funded her," she said.

Has crossed her mind

Since the video has been making rounds, persons have been encouraging the good Samaritan cop to adopt Baby Andre. She says while the thought has crossed her mind ever so often , she knows that he has other caring family members.

"He has family who loves him. It is just unfortunate that he has been hurt by the person who should have been there for him the most. There are other family members who have expressed their disgust at the situation and are willing and ready to assist him. I explained to them that wherever he goes, I would like to be a part of his life because he really touches a special part of me. I feel a sense of joy whenever I go to visit him and I see him held out his arms to me and started smiling," she said.

A past student of Charlemont High School, Garriques has been serving her country for the past 11 years. She encourages Jamaicans at home and abroad to assist each other wherever possible.

"The JCF is a noble institution and we have made a promise that we will be agents of change; and I am glad that I am one of them that uplifted that banner and stood by our motto. We live from pay cheque to pay cheque, but it doesn't hurt to lend a hand of kindness where possible," she says.