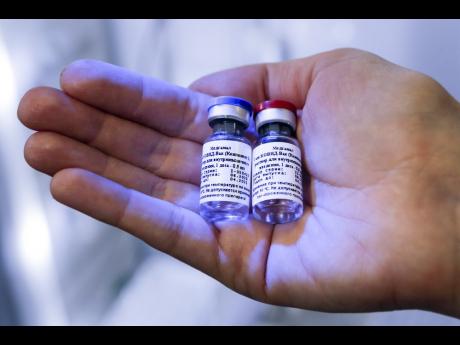 Russia on Tuesday, Aug. 11 became the first country to approve a coronavirus vaccine for use in tens of thousands of its citizens despite international skepticism about injections that have not completed clinical trials and were studied in only dozens of people for less than two months. (Alexander Zemlianichenko Jr/ Russian Direct Investment Fund via AP)

MOSCOW (AP) — Russia on Tuesday became the first country to approve a coronavirus vaccine, a move that was met with international scepticism and unease because the shots have only been studied in dozens of people.

President Vladimir Putin announced the Health Ministry’s approval and said one of his two adult daughters already was inoculated.

He said the vaccine underwent the necessary tests and was shown to provide lasting immunity to the coronavirus, although Russian authorities have offered no proof to back up claims of safety or effectiveness.

“I know it has proven efficient and forms a stable immunity,” Putin said. “We must be grateful to those who made that first step very important for our country and the entire world.”

However, scientists in Russia and other countries sounded an alarm, saying that rushing to offer the vaccine before final-stage testing could backfire.

What’s called a Phase 3 trial — which involves tens of thousands of people and can take months — is the only way to prove if an experimental vaccine is safe and really works.

By comparison, vaccines entering final-stage testing in the US require studies of 30,000 people each.

Two vaccine candidates already have begun those huge studies, with three more set to get underway by fall.

“Fast-tracked approval will not make Russia the leader in the race, it will just expose consumers of the vaccine to unnecessary danger,” said Russia’s Association of Clinical Trials Organizations, in urging government officials to postpone approving the vaccine without completed advanced trials.

The Health Ministry said in a statement Tuesday that the vaccine is expected to provide immunity from the coronavirus for up to two years, citing its experience with vaccines made with similar technology.

However, scientists around the world have been cautioning that even if vaccine candidates are proven to work, it will take even more time to tell how long the protection will last.

“The collateral damage from release of any vaccine that was less than safe and effective would exacerbate our current problems insurmountably,” Imperial College London immunology professor Danny Altmann said in a statement Tuesday.

The World Health Organization said all vaccine candidates should go through full stages of testing before being rolled out. Experts have warned that vaccines that are not properly tested can cause harm in many ways — from harming health to creating a false sense of security or undermining trust in vaccinations.